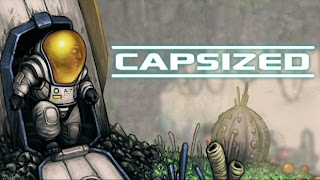 Despite the fact that I never really got into the RPG genre (which deserves an article of its own), I have always loved exploring mysterious new worlds. This doesn’t happen much outside of your Elder Scrolls and Dragon Quests, but games like Super Metroid and Shadow Complex managed to combine some excellent side-scrolling action with the ability (or rather necessity) to traverse uncharted and hostile worlds. In many ways, Capsized feels right at home with these titles.

The game’s setup is familiar enough: your spaceship has crash landed on a mysterious alien planet and you alone are tasked with saving your crew, assembling a radio to call for help, and most importantly, surviving. In a move reminiscent of something like the original Max Payne, the story unfolds through comic panels while the game loads in the background. Even if they are rather simple in style, they convey a lot of emotion, even if the story is rather flat.

The simple-natured story isn’t a bad thing though, as the main attraction is the gameplay. Each level will task you with an objective, from recovering power cells and rescuing shipmates, to something as straightforward as finding the exit. The set-up may differ from stage to stage, but in the end it all comes down to exploring the unknown world and blasting any aliens that get in the way.

Thankfully, the actual running and gunning is tremendous fun, thanks in large part to the variety in movement. The lone (space) ranger can climb and jump up walls, and is outfitted with a handy gravity hook and jetpack. The gravity hook is my favourite of the bunch; you can use it to zip and swing around a level with ease, and it’s a great way to build up momentum in order to fling yourself when needed. The jetpack has its uses too; it’s a godsend when flying over dangerous obstacles or enemies, though you’ll have to keep your eye on fuel reserves, as it’s all too easy to run out of fuel halfway through a level. 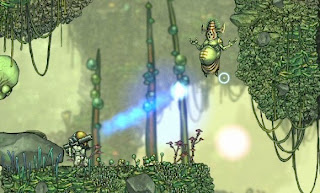 Rounding out the platforming, as you might have guessed by now, is the combat. The alien world is full of hostile natives, and there’s never a shortage of things to shoot. When it comes to these kinds of games, enemy variety is a must, as it quickly becomes monotonous when you’re simply shooting the same types of enemies for hours on end. Luckily, the game does a good job of switching up the enemy type, so you’ll always be on your toes. The weapon variety is also well implemented. Each gun feels wildly different, and over the course of the story you’ll get your hands on flamethrowers, grenade launchers, and more. Even better is the fact that every gun has an alternate firing mode and figuring out what each one does is a delight.

But what’s most impressive is how the platforming and combat play off each other so well. On their own, the gameplay would seem rather tame and unoriginal, but the game really comes together when you’re able to combine both to fit your play style. With the jetpack and a fast-firing weapon, you can take to the skies and rain down bullets with ease, or you can use the grappling hook in tandem with a rifle for a more slow-paced battle. Granted, you can also exploit the game’s movement variety and either ignore enemies or shoot them from off-screen, but where’s the fun in that?

Other than the campaign, there are plenty of reasons to return to Capsized when all is said and done. There are dozens upon dozens of secrets to find, which will almost certainly require multiple playthroughs. You can also tackle the story with another partner, either locally or online, and speedrunning, deathmatch, and horde-style modes round out an already robust package.

From the get go, Capsized always felt like the kind of indie game that wouldn’t get enough recognition or attention. It’s been over two years since its original release on PC, and I regret not having tried it out much earlier. If you’re looking for an excuse to shoot, explore, or just play something that’s a lot of fun, don’t look much farther than Capsized.

Activision buys itself out for $8.2 billion