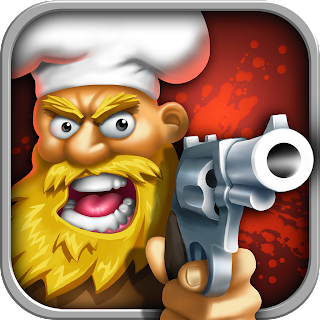 I think I just woke up in the early 90s. While the surge in indie games has brought an overabundance of retro titles, FDG Entertainment’s Bloody Harry does not even claim that its game has a retro appeal in the game’s description on the iOS Marketplace. Yet, it’s one of the most retro titles I’ve come across in a good while and I’m not even sure if it was intentional.

If you’re like me, you remember the early 90s fondly? Skin tight pajamas on teenagers fighting cosplay alien, err… things, otherwise known as the Power Rangers, was considered to be cool and sewer inhabiting, pizza eating ninja turtles were totally awesome. Okay, the turtles are still awesome, but my point here is – the characters/series that we loved back then were, well… kind of nuts.

Enter Bloody Harry. Taking a creative twist of the alcoholic beverage, Bloody Mary, Chef Harry takes us back to the side scrolling beat ‘em ups of yesteryear. Instead of beating folks silly though, Harry has guns. Yes, this game totally packs a retro punch. Utilising a floating control stick, you’ll blast away the mutated ingredients that make up the alcoholic vegetable drink in blood-spattered style. Moving up and down the screen as you progress forward through each level allows you to lineup devastating headshots. It’s a simple gimmick, yet it works so bloody well. 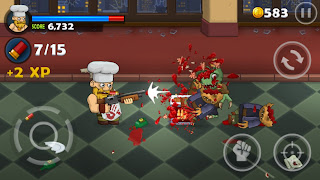 In Bloody Harry it’s all about the upgrades. As your sending the vicious veggies back into the Earth that they sprouted from, you’ll collect coins and crowns. Coins are in turn used to upgrade your cache of weapons. What starts out as a simple handgun, eventually becomes dual golden pistols and that simple shotgun becomes a full fledge combat shotgun with repeated upgrading. Crowns, therefore, are used to purchase character enhancements (armour), which are lost and need to be purchased again once depleted. Both of these can be purchased via In-App Purchases, but there is little need to ever resort to doing so, as the game doles them out plentifully.

Instead of being fuelled on top shelf vodka though, Bloody Harry downgrades itself by the way of repetition. While the upgrades keep on building, you will continue to fight the same old veggies and bosses over and again. While the level of difficulty increases with the size of your ‘boomsticks’, it is a shame that you don’t continue getting new crazed vegetables and environments to mutilate too.

Bloody Harry is indecisively retro, but comes with great appeal. Manic veggies of the Bloody Mary cocktail set the satirical mood of this fun little side scrolling iOS shooter perfectly. While the game’s repetition sets in a little early, the game’s abundance of upgrades will keep you turning veggies into mush for a good while longer. Still, it’s a shame, because with a handful more enemies and environments, Bloody Harry could have been a ‘must have’ title.