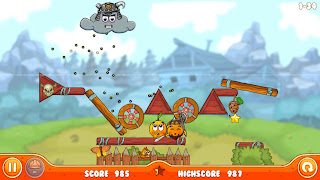 Cover Orange 2 tasks players with covering oranges to protect them from a raincloud wearing a viking helmet. No really.

As odd as FDG’s Cover Orange sequel is, it’s also an engaging and addictive puzzle game that you may find yourself pouring much of your free time into.

Okay, first, there is a story to Cover Orange 2 (CO2)… as odd as it may be. An orange (just go with it) is rolling along on his farm when suddenly a rift opens in the sky and sucks him in and deposits him in multiple time periods. Aaaaaand that’s about it for that.

Kooky background aside, CO2 is a really fun little physics-based puzzle affair. The goal of each map is a simple one – to cover your oranges (that doesn’t sound right) and protect them from a deadly raincloud wearing a horned helm.

The raincloud cackles evilly while pelting the soft citrus pals with rain, hale, or whatever. This kills them instantly and makes you a big loser for not making sure they were tucked in and watertight. It’s not the only obstacle you’ll face in Cover Orange, but it is the main bully in the game.

And when evil rainclouds threaten, your only recourse is to cover your oranges with whatever is on hand. Maps are loaded up with some random junk at the start. You’ll find some logs, ramps, pits and maybe some unique items like glass sections (that can be broken). Your job is to then use this existing environment in conjunction with a selection of goods that you’ll be given to work with, like wheels and wooden triangles, to actually cover the oranges.

Of course covering oranges might sound a lot simpler than it actually is as you’ll get an increasingly harder to use set of ‘stuff’ to work with as the game progresses. You also have to complete the goals quickly if you want to get the best possible score and grab the little stars that are held up from time to time by the animal background characters. Those in particular can be stunningly easy to miss. And while the base puzzles will start out easy enough, the difficulty ramps up fast and before long you will find yourself getting seriously stuck.

Some of the puzzles actually require more than a sharp mind too as you’ll have to be quick of hand to boot. It’s quite often that you’ll have to do things like drop an orange onto a glass ramp and then toss a spiked ball to shatter the ramp just before the little guy rolls off and falls into oblivion. Puzzles like that take a good eye as well as good timing and really variate the otherwise slow gameplay nicely.

Graphically, Cover Orange 2 is appropriately cheery and the sound will settle any nerves over the puzzles in no time flat. There isn’t all that much in the way of animation, but everything is super colourful and bright, which is exactly what you’d expect from a game like this. There’s some pretty funny stuff in here too including some things that probably aren’t meant to illicit a grin, but kinda do anyway.

I challenge anyone to not watch an orange roll off the side of a platform and not laugh as the other oranges (sometimes you’ll have more than one) and little woodland animals start to cry uncontrollably. The oranges even have little hankies! Fantastic- and I don’t mind telling you that I threw a few to their doom just to see it. No, I’m not proud, but it was funny.

Cover Orange is an oddly fun time. It’s got a really strange premise that the developers tried to shoehorn a plot onto, wacky characters and a nonsensical premise (covering oranges?). What really saves it though is the actual engine, which is rock solid and just makes for a great and charming physics-based puzzle game.

I had an excellent time with Cover Orange 2, which believe me says quite a bit after my initial reaction. Now, if you’ll excuse me I have to go roll some oranges off of a cliff… I mean cover some oranges. Yes. Cover them.