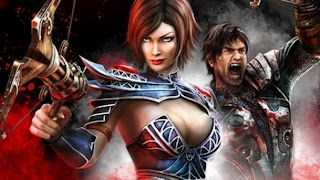 It took me all of five minutes to realise I was not going to enjoy my time with Blood Knights.

In that first five minutes I was led through a tutorial dungeon which, in most games, introduces the characters and sets up the narrative by introducing a conflict. But at the end of this tutorial dungeon I had no real idea who the characters were, and while I had a vague idea that there was some betrayal involved and now, somehow, the game’s hero had been permanently bonded in some way to the game’s anti-hero female vampire, and now they need to go on some kind of quest thing. This is all told through single-sentence dialogue sequences that fail to tell us anything of substance about the game’s world or its characters, and for a RPG to leave players completely in the dark is an immediate sign that the the entire experience is going to be painful. 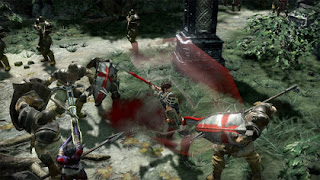 For all of this I blame the God of War series. Not that Sony’s series is an RPG, or features a poor plot, but rather that game has become rather influential and now far lesser designers seem to feel that they can pull of minimalist dialogue like the Santa Monica studio can. What those studios seems to fail to understand that the God of War stories are minimalist, but expertly written, with literally every word drenched in a powerful meaning that pulls together a cohesive and surprisingly rich tale. It’s not just a matter of throwing random sentences together and leaving players to fill in the ten sentences that needed to be added to make meaning, as has happened here with Blood Knights.

If anything, writing a story in the minimalist way that the likes of God of War does is a greater challenge on a technical level, as it means the writers and developers need to do far more with far less. My honest recommendation for all game developers would be to go for more traditional story telling with lengthier cut scenes unless you’ve got a big enough team to make the snappy plot sequences work. 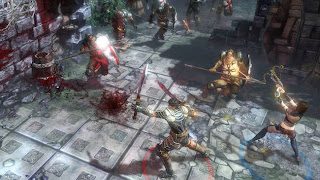 RPGs struggle more than most when the story lacks impact, and Blood Knights is no different. Beneath that threadbare plot is a very generic Diablo clone with a very generic co-op mode. Players control either the melee fighter dude or the crossbow wielding vampire. I wish I remembered their names, but I don’t. In single player players can swap characters with a press of a button, but there’s not much point to using the melee guy for the most part because the AI is so bad that it’s possible to exploit it to pick of stationary enemies from a distance or get them caught behind some scenery.

These characters have some basic skill trees to upgrade, and there’s the typical loot drops found in the genre to customise the characters. Mechanically it works better than I has expected given how raw the rest of the game is, but there are dozens of games in this genre, and being mechanically proficient is just not enough in this case. The one relatively unique feature is the ability for the characters to drain the blood of their enemies, being vampires and all. And, in fact, the most affecting element of the entire game is the health restore points are not chests that players open to unleash a rainbow of orbs as in most action games. No. The health restore points in Blood Knights are still-living people impaled on stakes which players can take advantage of to restore almost all their health. Why this touch of Gothic horror and drama wasn’t taken further I have no idea, because a genuinely brutal Gothic horror tale would have helped this game stand out in the genre.

It also doesn’t help that the game looks terribly generic, either. I get that it’s going for the Gothic vibe, but it’s like the art designer focus grouped with a group of generic Dungeons & Dragons players for their vision of Gothic environments. When you’re talking about women dressed in body-hugging strips of leather, crumbling castles and dark green trees, then you’re going to need to do something spectacular, somehow, to attract notice. Blood Knights never does that.

It’s also a generation or so behind the times. Characters are built with a minimal number of polygons and look a little like the old PS2-era top down Diablo clones of The Bard’s Tale or Baldur’s Gate: Dark Alliance. Animation is a little stiff and the environments are filled with invisible walls and are completely non-interactive. It’s not ugly, but it’s also not very interesting. 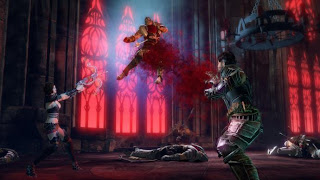 Blood Knights is a pity because it’s easy to imagine that there was some genuine creative energy that has gone into this game. There’s a mythology there that the developers created, and then neglected to flesh out. There’s characters there that could have potentially been interesting, had decent voice actors been brought in and been given decent lines to voice.

And the game’s action could have been compelling, if there had have been a compelling reason to play on. Because there isn’t, unfortunately there is no reason whatsoever to play Blood Knights.