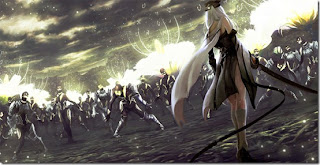 Cavia was one of my favourite Japanese developers for the short time it was around. The team was responsible for not one, but two games that I couldn’t put down – Drakengard on the PS2 and then Nier on the PS3.

Following the announcement that Cavia was no more I was rather sad, if for no other reason than I felt that the team never quite hit the heights they could have with both Drakengard and Nier. Great games, both of them, but both had clear room to improve even more.

So when Cavia – now absorbed within Marvellous, announced that the team was back together and working on Drakengard 3, I was over the moon. Drakengard in HD? Sign me up.

Now compare to the gameplay from Drakengard 2 (also on PS2, and a direct sequel to the first game):

And the gameplay from Nier:

Now, even taking into account the fact that the original Drakengard games are a generation behind, there are a couple of features to Drakengard 3 which seem a little strange for that franchise. The most obvious one is the numbers of enemies on screen. Drakengard has historically been about battlefield conflicts and the hero takes on units of enemies in an almost Dynasty Warriors-style combat system.
Nier, meanwhile, was about small skirmishes with enemies that were more mobile and generally tougher to kill individually. To me, the footage of Drakengard 3 is closer to the latter than the former.
With that said, the official trailer for Drakengard 3 does suggest conflicts with units of enemies:

However, the second point I would like to raise here is that in terms of aesthetics and art direction, Drakengard 3 seems to share the same art aesthetic. Environments have an elegant washed out appearance to them and characters have the same approximate design and costuming as we saw in Nier 2. Kaine’s costume from Neir is apparently an unlockable or pre-order bonus here too.

On the other hand there we don’t know what the team at Cavia would have done with Drakengard if they produced one in HD as an independent developer. The PS2 games were especially poor in terms of visuals, so it’s hard to get a sense of what art style the developers were gunning for in the first place.

It’s all a little confusing, but to me Drakengard 3 looks almost more like a sneaky attempt to do Nier 2 than a genuine Drakengard game. Or just mesh the best of both games together and hope for the best.

What are your thoughts about the game… or are you just happy for it to exist at all? Sound out in the comments below!