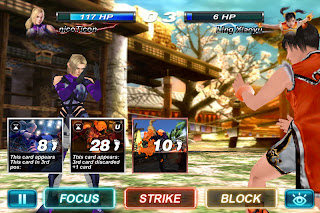 Tekken is a fighting series that has been around for many years now, boasting excellent fighting mechanics and some of the best visuals around. A couple of weeks ago, Tekken Card Tournament released on iOS and Android, bringing a collectible card game flavour to the series.

I have spent more than a little time with CCG mobile games, ranging from Rage of Bahamut, to Guardian Cross to Marvel: War of Heroes.

All of these titles are similar in that the games themselves are free, but they support micro-transactions that allow you to progress more quickly if you are willing to put some money down on them. I played the above three games for several months, never dropping a cent on them. I was fairly competitive all the same, but that was because I invested a lot of time into them instead of money. 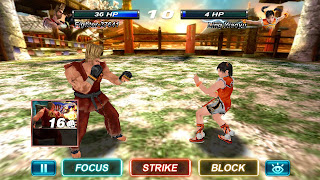 Tekken Card Tournament relies on the same principles. You can select one of several characters and you gain a deck of basic cards to start. You can earn two different kinds of currency through play, both of which allow you to buy different types of card packs. You can spend actual money to get virtual card packs as well.

Like the above games, Tekken Card Tournament also has a Stamina system – essentially you can only perform so many battles before you need to take a break – or purchase more stamina so you do not have to wait. That is not to say Tekken is a clone of the other games – far from it. It may have a similar money making model, but the game itself is quite different

For one, this title is – for better or worse – easier to pick up and put down in small doses. Sometimes the events in the other three games would keep me busy for up to an hour per title. On a daily basis – that obviously added up. Tekken I can usually use up all of my stamina and do what I need to do in about ten minutes. Of course, I could dump more time into it each day and progress faster, but the game itself strikes me as a bit more casual in approach overall. 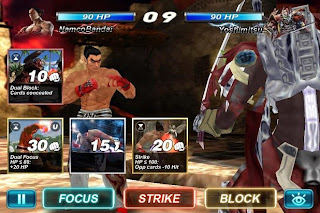 There is an online competitive component, and I will admit that playing as a freebie – I generally get walloped there. I have won several matches over the last two weeks or so – but I would guess I have lost at least two to three times what I have won. However, you can also square off with a computer AI opponent, and it’s far easier to make progress there – I’ve won most of those games.

The other thing that is different is the game itself. For starters, the presentation is pretty slick. The menus and even the character models look good – like they belong in a Tekken title. What you do when you play is build a deck with cards appropriate for your character. You then participate in a sort of rock/paper/scissors game where you can use Focus – and draw a random card from your deck, Strike – which allows you to attack your opponent with the drawn cards you have in your hand (discarding them so your hand is then empty afterward) and block (which does not allow you to gain a card, but protects you from up to two attacks from your opponent).

The gameplay is an interesting mix of trying to build up your attacks while surviving what your enemy may throw at you. To start, the cards are pretty basic, with punch or kick cards that maybe yield a small amount of damage. However, as you unlock new cards, you can find some pretty interesting ones, such as chipping some damage off of your opponent’s first card, or gaining an extra card if you block successfully – things like that.

There are weekly tournaments, bonuses for winning matches and an experience system that allows you to level and unlock new modes and options along the way. Overall, I enjoy the game – it is different but I have always been a fan of the Tekken video games and this is a fun spin on it. I am also a sucker for CCGs. I do not plan to pay any money toward it, and only time will tell if I stay with it for several months like I have similarly modelled games on my iPhone, but so far it serves up a nice, free distraction from time to time.

Review: The Denpa Men 2: Beyond The Waves (3DS)