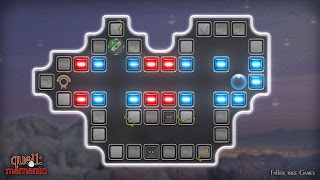 It’s not often that I get hooked into a puzzle game because of its story, let alone because its story elements are more intriguing than the actual gameplay itself, but that’s exactly what happened with Quell Memento.

The first thing I did after the game kicked off was to touch the screen, causing the glass title screen to shatter rather spectacularly and immediately hooking me in. Then, slowly as I progressed through the puzzles, this story explaining it all was narrated to me in a drip feed of intriguing bits and pieces. It’s a very simplistic story, sure, but at the same time it is paced out so well that it kept me interested right through to the end, and this is not something that I have seen too often before. 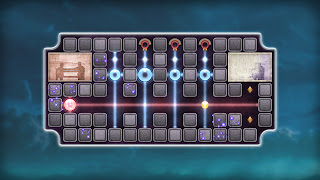 Like the story, Quell Memento is a puzzle game that slowly drip feeds out its gameplay elements. You begin with the basic task of collecting pearls as a raindrop. Slowly as you progress through the 150 levels you get introduced to basic red raindrops that will kill your raindrop, lights that have to be activated by lasers to navigate the pearls to safety and later ‘smart’ red raindrops that move in concert with your own actions. Combined together they do create interesting puzzles, though unfortunately they are also not especially layered as puzzles – most of them are sadly completable in just a few seconds.

There were a few occasions where I was stuck and could not work out the solution. Luckily there are no load times and because the levels themselves are so short you won’t find it such a pain if you fail a level a few dozen times working out the solution via trial and error. While it’s a feature that is good for those who struggle, it also means that these aren’t truly puzzles – it’s just too easy to guess your way through to the solution. It’s a pity because if the developers had have taken these ideas and built layered puzzles around them they quite genuinely would have been rewarding brain teasers. For people who are getting stuck often there is a hint system, which you can access by collecting coins. Coins are gathered by completing levels. 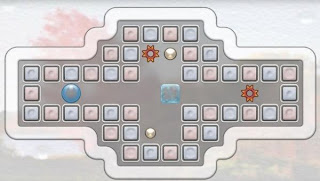 Whilst the gameplay is a little too limited for its own good, Quell Memento makes up for it in the brilliant graphic and sound design. The game looks stunning on the Vita’s screen and it gets the small details right. This ambience helps enhance the mood of the story, and the soundtrack is peaceful enough that the game never becomes a stressful experience.

Quell Memento is definitely not the best puzzle game available for the Vita. Not when the console has games like Lumines and Thomas Was Alone running on it. But, if you are looking for some decent game design that which offers in interesting narrative in between the puzzling then Quell Memento is for you.