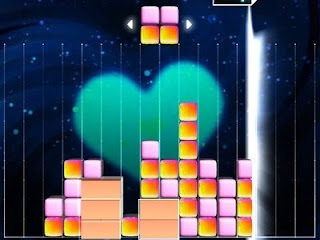 Most good handheld consoles launch with a good puzzle game. The Game Boy launched with Tetris. The Nintendo DS launched with Polarium. The Vita has launched with Lumines: Electronic Symphony.

Of course, Lumines isn’t exactly a new game – it’s also done well for itself on the PSP and PS3, but that’s not taking anything away from the Vita game – this is a good quality game. A must-have for series newcomers, and well worth a look for the veterans too.

The basic game has changed about as much as the basic idea behind Tetris – that is to say not at all. The idea behind the game is to form square blocks of the same colour out of square blocks of mixed colours that fall down the screen. There are only two colours on the field at any time, but it’s by no means easy. The pace of the game picks up quickly, and forming neat squares can become a difficult task. The game finishes when the blocks reach the ceiling of the playing field.

What really makes the game interesting is the way music is built into the experience. Represented by a moving bar, the game’s beat determines when the matched-up square blocks of the same colour disappear. As the moving bar passes, eligible blocks disappear. So to get the really good scores, you need to time what you’re doing with the rhythm of the music. Clear enough blocks in one bar of music, and you’ll get a “bonus,” which is where the big points come from. 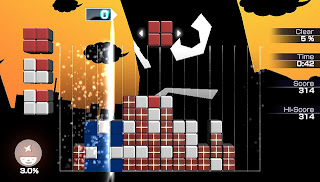 What amazes me about Lumines is how subtle this gameplay element is. You’ll never really feel like you’re playing a rhythm game, but in the end, that’s exactly what you’re doing. So it’s just as well that the soundtrack is absolutely spectacular. One moment there’ll be a pulsating beat to pull your energy levels right up. Then you’ll clear enough blocks to start a new stage, and the soundtrack will seamlessly transition to a chilled track more at home in a jazz club. Artists in the soundtrack (33 songs strong) include The Chemical Brothers, Goldfrapp, Benny Benassi, Aphex Twin, Air and The Pet Shop Boys. That should prove two things – 1) the music mix is quite eclectic, and 2) the music budget for this game was substantial. This is a game you’ll want earphones for.

It’s a little disappointing how thin the gameplay modes are. The game encourages you to stick to the basic endless score attack mode, and buries a few different takes on the game in a separate menu from the main screen. There you’ll find things like time attack (score as many points as possible within a time limit) and an online mode which tasks everyone in the world to chip away at a giant cube of blocks, with the cube being reset daily. 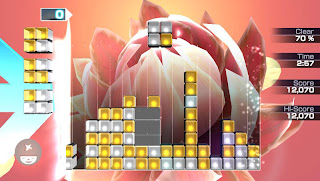 On the positive side, the main game is probably enough for most people, and it’s an addictive experience since the online leaderboard (for your PSN friends list) sits right there on the main screen, encouraging you to keep shooting for the number #1 position bragging rights.

The presentation in general is hypnotic. Incredibly subtle in the way it uses the Vita’s power, Lumines is vivid. The colours faintly glow with warmth, and the theme (or skin), changes with each different music track in a way that suits the mood of the game perfectly. While it’s not the flashiest looking game on the Vita, Lumines might be the most visually pleasing game.

The only real downside to the whole game is the control system. The touch screen controls don’t work that well, and the D-pad controls is balanced slightly wrong – hold left or right for a fraction too long, and the blocks you’re in control off will fly well past the mark you were aiming for. With a bit of practice it’s ok, but I would have preferred the game be a bit more responsive.

That’s not a reason to avoid the game, though. Lumines is something to be experienced, and if you are a fan of seeing how games can use music in a way that is core to the experience, without having you bounce around like a fool “dancing,” then this is one of the very finest examples.