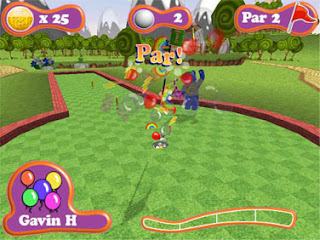 I’ve never played mini golf in my life. The closest I’ve been to the real thing has been through video games like Gummy Bears Mini Golf.

Unfortunately, video games like Gummy Bears Mini Golf don’t make me want to go out and play the real thing with friends or family… I’m not sure what the developers have against the great sport of mini golf.

Gummy Bears Mini Golf doesn’t have a plethora of content nor does it differentiate itself from other examples of the genre. It’s pretty simple in execution and everything is done with the touch screen whether it’s hitting the ball, switching your club, or turning your candy-coated bear in the direction you please. You can also select how strong you want your swing to be via the irresistibly colourful gummy meter.

(For another minigolf game available on the Nintendo 3DS eShop, you might want to check out Fun! Fun! Minigolf Touch)

The gameplay itself is where things get into the kind of sticky situation that reminds me of what happens when real gummy bears get soaked in water. Aiming is easy and predictable, but the chewy obstacles and mysterious outcome of actually putting the golf ball tastes bitter. The physics definitely suffer from some sort of a sugar overdose and the golf ball keeps rolling on and on after most other objects would have long come to rest. Every time I thought my ball should have stopped, based on the strength of the putt, it slid onwards into, inevitably, a bad position for the next putt. 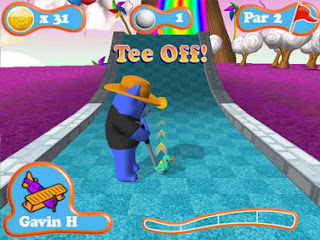 Free Play and League are the same gum drop with slightly different colours. The only real difference is that League rewards you with coins for participating. Multiplayer isn’t the blueberry pie your grandmother baked, either. There’s no wireless play amongst other 3DS owners. If you want to play multiplayer with friends of family, get ready to hand the system off to your acquaintances’ sticky fingers. If you’re the kind of manic that won’t share his toys with other people, then there’s no multiplayer for you.

Those coins that you earn in League allow you to purchase accessories for your gummy bear. These include hats, shirts, balls, putters, trails, and nameplates. None of these purchasable options add to the gameplay in any way, shape or size, and really, who’s going to care that much about dressing up a gummy bear?

Gummy Bear Mini Golf definitely doesn’t utilise the 3DS hardware to its limits. There’s a lack of textures across the board and nothing exactly stands out as impressive; the character animations, golf course, and scenery all look outdated and rushed. The 3D is by far – and I can’t put enough emphasis on this (hope that bolding helps! – ed) – the worst I’ve seen yet. It causes eye strain to the point where I go cross-eyed. Immediately after starting to play. 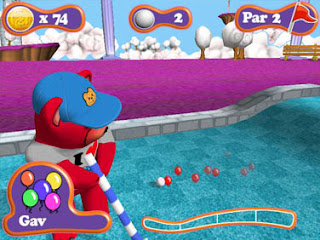 Another aspect that’s a little crummy is the soundtrack. It’s appropriately bouncy and will attract a very young audience, in the sense that it is catchy and they will start humming it over and over again to the sheer frustration of any adults unlucky enough to be around.

Gummy Bear Mini Golf isn’t a recommendable game, even to mini golf junkies. It doesn’t execute any aspect flawlessly or in a unique fashion. If you have young children who would be interested, approach with caution and make sure you have parental controls on and can block that 3D effect. Because otherwise your optometrist will be buying a lot of gummy bears with the money you’re going to need to put up to fix your child’s eyes.