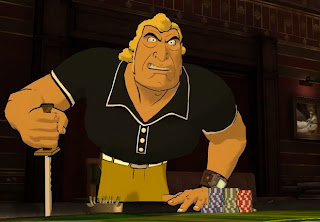 Telltale Games’ Poker Night 2 is inspired. Amongst the thousands of Poker games out there here is one that has managed to stand out by playing to Telltale’s unique strength – storytelling.

Yep, I was surprised to come to this realisation as well. Poker is a game that does not really need characters to work. People don’t go and buy a Poker game because of its in-depth campaign. So because Telltale Games managed to achieve this, Poker Night 2 stands well and truly apart from every other game in this genre.

So how does it work? There five people sitting at the Poker table in this title – yourself, and then four characters drawn from Borderlands 2, The Evil Dead and Sam and Max and The Venture Bros. There are all near-perfectly voiced and performed and there’s hours of entertainment involved in simply listening to the table talk as chips are thrown on to the table. Each character also has something of a unique personality when it comes to risk taking with poker hands. It’s fun learning how to read these characters, and while it’s not exactly difficult to do it is rewarding to learn how to read their bluffs and make bluffs of your own in return. 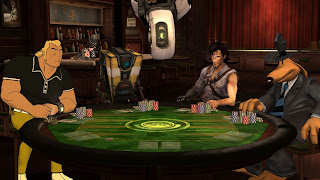 Oh, and GlaDOS is the dealer. I don’t think I need to explain how cool that one is.

The actual game of poker is fairly standard here, with some nice presentation and background music supporting what is essentially a whole load of fan service. There’s only two forms of poker on offer (Texas Hold ‘Em and Omaha), but it’s enough to justify the cost of the game, especially when you take into account that this game provides rewards for your Borderlands 2 save game.

I hope we see more of these cross-game initiatives going forwards. It helps build engagement with both of the games and helps provide a sense of reward that, in Poker Night 2’s case, would feel very limited otherwise. Aside from unlockable deck and chip designs, there’s not much reason to play this game for the sake of it once you’ve heard all the clever one liners once or twice. With the unlockables in Borderlands 2? Yeah, there’s a benefit to the grinding then. 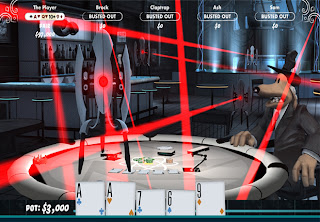 For obvious reasons this game is best played by people who are fans of the shows, movies and games, but that’s not to say the game isn’t still worth playing. I haven’t seen any of the episodes of The Venture Bros, but I greatly enjoyed the role of Brock in the game. Each of the characters play off one another so well that I could not imagine this game replacing any of them; even with one more familiar to me.

For all of its humour I would be remiss to not point out that this is a very poorly made game. Loading is frequent and causes distortions and pauses mid-conversation. There’s no way to speed up the actual process of playing cards – extended dealing animation and all. And, as I said before, aside from the Borderlands unlockables there’s only a hour or two before comments become repeated a little too often for their own good. For a game that is so focused on such a subject as simple as poker, this isn’t really acceptable.

Telltale Games deserves a lot of goodwill for this game as it has done right by fans of all the franchises involved. It just has not made a very good game on a technical level.