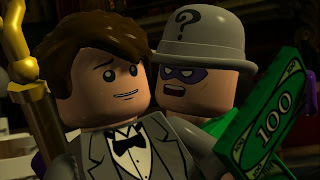 I don’t play too many Lego games these days. It’s not that I don’t enjoy them, but it’s simply that after those excellent Star Wars ones, I’ve felt they’ve been too iterative for their own good.

So I was pleasantly surprised that I enjoyed Lego Batman 2: DC Super Heroes so much. Not because it does anything differently to other Lego games – I would be lying about that – but because after a break of some years from the series I was able to again enjoy the game for offering an effective, tight formula that is executed perfectly.

But first, perhaps the game’s greatest strength is that it makes such great use of the DC Universe license. This game is not just about Batman – as the second half of the title suggests it’s about Superman. Green Lantern. All the good guys all coming together to bop the evil Lego bricks on the head. 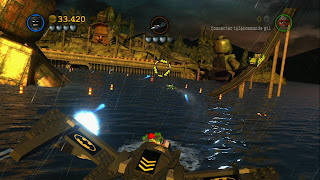 And those evil Lego bricks – representing everyone from Lex Luthor to Bane, The Joker to Scarecrow. There’s a lot of them in this game, and they come thick and fast. It works because the script is so well written – like a morning cartoon – that it’s impossible not to get invested in the game and its Lego charm. Thanks to the game’s open world nature between missions and the ability to hunt down these villains as side-quests, this became one of the few open world games where I actually felt the need to track everything down, so invested I was in the enjoyable presentation and the clever leverage of mountains of DC lore.

The game sticks to a very standard formula that I think most people are now familiar with – after all, everyone’s played at least one Lego game by now, surely? Missions are linear and heavy on the puzzles with the occasional goon thrown in for variety. Players need to navigate through levels using the unique abilities of the characters before finally coming to a boss battle, which itself plays out as a multi-stage puzzle rather than straight-up combat (which is just as well, because the combat itself is literally one note). 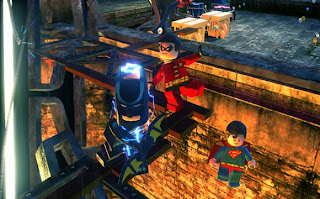 Other than that levels are spent collecting stuff. I’ve been critical of games that aggressively require players to hunt down hidden objects, and the Lego series has always been guilty of this. It’s not enough that you need to collect a virtual tonne of Lego bits – which pass as the game’s currency – in each level. There are people to rescue and gold bricks to uncover before any level can be considered “complete”. Some of this stuff can be hidden well enough that it might take two or three play runs at any level to find it all.

These “collectathon” features in games do need to stop because they add nothing to the experience, and are a relic of a time where game developers would fill their titles with padding to produce the biggest, longest games possible to prevent people trading in their largely single-player games. There’s online multiplayer now to act as a deterrent to trading in games, and people are more comfortable with buying campaigns that are shorter and more focused. It’s time that this relic of collecting virtual shiny bits was laid to rest. 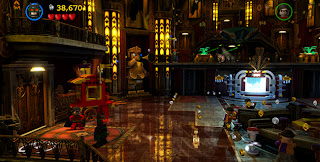 That aside I couldn’t get too angry at DC Super Heroes because any flaws it has it hides behind the wide, yellow grin of a minifig. The strength of these titles has always been their innocent sense of humour and their immediately accessible style of play. The two-player mode especially works well as it allows parents to help their kids through the more difficult bits, or simply allows to friends to sit down and enjoy an experience that doesn’t involve bloodletting – a welcome change of pace given the progress of the industry.

Because we’re reviewing the Wii U version here I would be remiss if I didn’t mention that the Gamepad utilisation is completely uninspiring and were it not for the Off-TV function I wouldn’t have looked at the Gamepad’s screen once. People keep telling me that we shouldn’t expect every Wii U game to make use of the Gamepad, and that’s fine in theory, but it doesn’t help shake the feeling that this is a very quick port indeed – the fact that there’s no DLC from the PS3/ Xbox 360 version doesn’t help there either.

But regardless, this is one of the finest Lego games ever made and if you are like me and haven’t picked one up in a while, then this is a good title to pick up and remind yourself why this Lego series was fun in the first place.