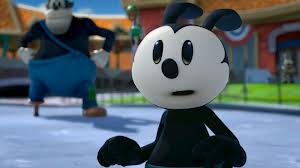 It’s a little sad seeing Mickey’s second “Epic” outing ported to the Vita, given that the original console release was such a failure that the team that made the game no longer exists. It’s like the port is a virtual obituary to the developers: “here is the last game of the short-lived Junction Point.”

I just wish that the game itself was a better legacy, or that the Vita port in some way resolved all the problems with the original game. Unfortunately it doesn’t. Epic Mickey 2 is the most heartbreaking of games – one that was made with genuine and obvious passion, but a game that is, on a fundamental level, so technically flawed that it just makes it hard to love, and the Vita doesn’t fix these issues. In fact, it compounds them. 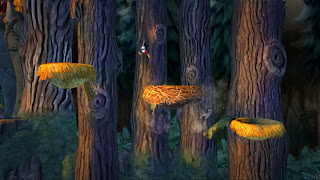 Central to the game is Mickey’s paintbrush, which operates both as a weapon (by “firing” paint at enemies to either destroy or befriend them) and as a general purpose tool for navigating the game’s puzzles. Thinner removes objects in the world, which can for instance, cause blockages to disappear. Paint fills in objects, allowing players to create bridges and platforms. In the Vita version, players have the option to either aim the paintbrush using dual control sticks, or the touch screen. The touch screen is far too imprecise to be much help, and the dual sticks are far too ‘sticky’ for fast, precise aiming. In other words, for Mickey’s most important tool, neither control system is even close to adequate.

The second core gameplay feature is that Epic Mickey 2 is a buddy feature – Mickey is joined by an AI ally, Oswald the Lucky Rabbit. One of Disney’s forgotten heroes, Oswald is a very lovable character. Then he starts moving around and it all falls to bits. Players don’t have direct control over this fellow and his AI is up there with the most broken AI systems I’ve ever encountered. Oswald regularly gets himself lost or otherwise stuck and once or twice I needed to restart the game as a consequence. Oswald has a unique set of abilities that are required for getting through some puzzles, and some of those are activated by the touch screen. Unfortunately because the touch screen is so inaccurate I would often find myself instead firing Mickey’s paint brush at the fellow, rather than getting him to do his job. This doesn’t cause any damage, but again it’s a frustration born of a gameplay system that just can’t handle its ambitions. 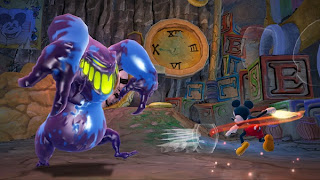 In the console version of the game it’s possible to rope a friend in to fix Oswald’s determination to mess everything up. Unfortunately thought multiplayer exists in the Vita game, it’s not the ideal platform for this kind of lounge chair co-op experience. With most Vita and indeed most handheld game experiences, if it relies on multiplayer to work it’s in trouble, and that’s a fundamental failing of Epic Mickey 2 as a concept for a handheld title.

It’s a pity that is the case, because the environmental puzzles that the game throws at players would actually be pretty engaging if they weren’t so frustrating. I’m not the biggest fan of 3D platformers in the world, but the game elegantly weaves through some moral decisioning and RPG elements, and isn’t nearly as reliant on collectibles as some other examples of the genre. 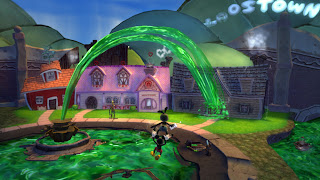 On a conceptual level, in fact, I love Epic Mickey. Both the Wii original, and this sequel have at least tried to do something different, and bring in some heavier themes and gameplay concepts that most platformers ignore completely. The two Epic Mickey games are less about simply challenging player’s reflexes and controller skills through to the inevitable difficult lass boss, and more about giving players a narrative and environment with meaning and purpose. I would expect no less from a game with Warren Spector behind it, but it is nice to play a game that brings a different point of view to what is often a very traditional genre.

Parts of the game are simply gorgeous, too. The regular 2D-animation style cut scenes are lovingly drawn, and the game even has a few classic Disney-style musical numbers thrown in for good measure. The background music is pure Disney magic and the unlockables and bonus material range from actual Disney animations straight out of the archives through to rare art. As a Disney fan, this stuff was almost worth working through the frustrating elements of the game because, as a partial archive of some of Disney’s oldest material, this is stuff that’s otherwise hard to come by. 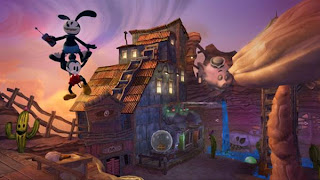 But that impeccable presentation is ruined by some very poor work at the port from HD to handheld. The in-game graphics are washed out and fuzzy. Mickey and Oswald especially look like they’ve been shoved through one too many compression engines. The voice work in the dialogue confused me a little too – conversations at times sounded like they were recorded in two entirely different recording studios, and the jump between the two different tracks would be at times mid sentence, creating a very jarring effect indeed for my ears.

I feel bad writing this review. As a fan of Mickey and Oswald and everything that Disney from a century ago stood for, I feel like I shouldn’t be giving this game a poor wrap. It bites especially deeply because it’s clear that the folks at Junction Point loved Disney as much as I did, but unfortunately at a technical level they were not up to the task, and even more unfortunately the people that ported the game to the Vita have managed to mess things up even more.

Review: Magic the Gathering: Duels of the Planeswalkers 2014 (iPad)