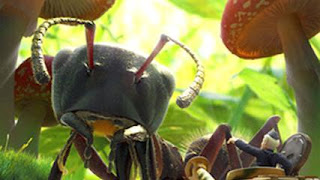 Really, we expect better from Keiji Inafune. The man is outspoken, but deeply creative, and his other recent games (Soul Sacrifice, Asura’s Wrath) are well worth playing. His upcoming Yaiba: Ninja Gaiden Z looks brilliant. What the heck happened with Bugs Vs. Tanks?

I can only assume that some executives from Level-5 decided that Inafune would be a perfect high-profile developer to produce one of the Guild-02 titles. After all, he is a great name amongst game developers, and he’s largely independent now. Here’s someone who could quickly throw together the concept for a clever little game with some brand power to stick on the promotional material.

I can only assume that once he had the contract for the game Inafune passed the project over to a work experience student, because I really can’t imagine how the same mind that brought us Soul Sacrifice could bring us just a few months later a game so pedestrian as Bugs Vs. Tanks. There’s not a shred of creativity that makes this game worth playing, and it’s not backed by much either in terms of tight gameplay. It’s a decidedly dull top-down shooter. 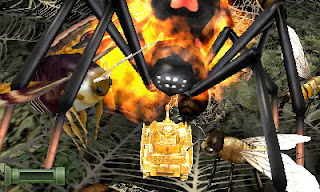 First though you’ll need to get over the idea that this game positions a battalion of German tank soldiers from World War 2 as the heroes and victims in the game. They’ve been shrunk down to a pitiful size in a Honey I Shrunk The Kids moment, but we are asked to sympathise with these downtrodden soldiers, while the Allies forces are positioned as the unseen but evil forces that are the cause for the German soldier’s woes. Credit to Inafune there for taking a political risk, and the game is never so heavy-handed to be offensive, but we’re not used to WW2’s Germany being the heroic one, so that was a bit of an eye-opener.

The problem is that once the game had my attention with that narrative twist, it did nothing about it. The game is split into missions of five or so minutes of length a piece, and in these missions players will be collecting resources, defending key objectives and taking the fight to a bunch of bugs. Another Honey I Shrunk The Kids moment. These bugs are not that varied, but they’re quite deadly and can be very fast. So fast, in fact, that players will spend more time looking at the map on the bottom screen to figure out where they are than the top screen where the action takes place. Why? Because the tank takes up so much space on the top screen, and the action is zoomed in so far that it’s impossible to see what is coming up before it actually hits. 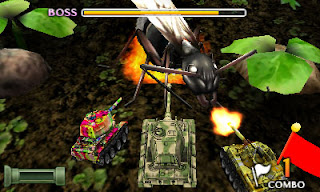 Weirdly, the team at Comcept seem to understand that this is a problem. Tanks are equipped with auto-firing  machine guns at the front that don’t do any damage to the bugs, but will temporarily stun then, giving players the opportunity to line up a shot before the bug recovers and wallops the machine. I have never enjoyed it when developers find gameplay gimmicks to conceal fundamental flaws in their execution. It feels like a sorry excuse for something that shouldn’t have happened in the first place.

In single player the game’s difficulty ramps quickly. While I admit that I’m not a specialist in this kind of game, it was a little surprising that I managed to fail a mission as early as mission 5. The difficulty keeps scaling there, and I have to admit that I haven’t finished the game – I am thoroughly stuck. I’m assuming that multiplayer makes things a little easier, but I haven’t been able to play that yet.

What is good about Bugs Vs. Tanks is, if you get into it, there’s far more content here than some other Guild games, like Liberation Maiden and The Starship Damrey. In addition to a wealth of missions, there’s all kinds of unlockables and tank combinations to play with.

If only Bugs Vs. Tanks didn’t struggle so hard to keep my attention. This is a very vanilla top-down shooter with nasty difficulty spikes and some technical issues that are just unnecessary and not what we expect from Inafune. When his games have flaws, they are never this basic.