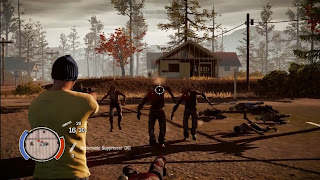 In two days the Australian Classification Board has shown its true colours. That R18+ rating, which was introduced on the promise that the Board recognised the rights for Australian adults to play the kinds of games that children should not be playing, was a lie – the Board plans to continue banning any material that would be slightly objectionable.

The second victim within the span of two days is State of Decay, an open-world zombie survival game by Undead Labs. Where the previous victim of the insanity, Saint’s Row IV, was banned because of “sexualised violence” (read: a joke involving a sex toy), State of Decay is being banned because of the depiction of drug use. Namely that drugs (with real names) are used in such a way to render benefits to the player.

Fallout 3 previously fell afoul of the same condition for being approved to release, and the developers were forced to come up with silly fake names for drugs (which do the same thing) to get that game released. One would assume that the same thing would happen here since releasing a game with fake drug names means that there is still money that can be made out of selling in Australia, but once again I just have to make this statement;

For the love of all that is holy, Australian Classification Board, this is an R18+ rating you have at your disposal here. You are not the Censorship Board for a nanny state carefully screening material to control the population.

While I am here I would also like to issue my disappointment in the games industry representative bodies in Australia. To date there has been no statement to the media expressing disappointment of the overzealous application of the Refused Classification rating.

Your job is to support an industry that is barely surviving locally. So stand up and fight for its legitimacy. No one is going to take this industry seriously as long as the jokers at the Classifications board are banning games for something as pedestrian as featuring drug use.

Review: Magic the Gathering: Duels of the Planeswalkers 2014 (iPad)