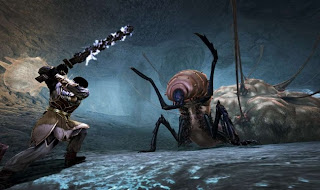 One of the nicest surprises of the year so far for the PlayStation 3 has been the release of a creakily-old, but quite enjoyable western RPG, ArcaniA 4.

Retitled ArcaniA: The Complete Tale – one assumes because it’s the first time a PlayStation console has had a game of the series released on it – it’s not really the complete tale. Rather, it’s just the fourth game with the expansion packed into it, but it’s perfectly playable without having played the previous games in the Gothic series.

It’s surprising that this game has finally been ported over to the PS3 – it’s been on the Xbox 360 for some three years now. Despite the delay it is still worth playing if you’re the kind of person that can handle B-grade RPGs. I’m not going to sugar coat that fact – this game is often a technical mess. You name the glitch or technical flaw, it’s probably here. Textures load in slowly, leaving you with a featureless blur that slowly morphs into a low-grade set of textures every time you visit a new area of engage in dialogue with a character. The music, though generally pleasant, suffers from odd moments where it will drop out completely and loop in random intervals. 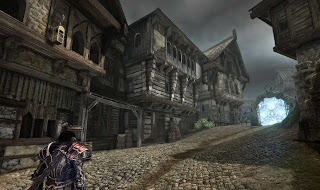 Most amusingly of all, the game features dynamic rain and fog effects and a day-night cycle, but if it starts raining and you enter a small enclosed area like a building, and it will often continue raining as though there is not a roof there. That’s some nasty leak.

These quirks all stick the game solely in the same category of RPGs such as Risen 2 and Two Worlds 2 – ambitious open-world style games but so riddled with technical faults that it’s impossible to mistake them for a game like Skryim or Dragon Age. I honestly can’t remember it being as glitchy in the Xbox 360 version, but to ArcaniA’s credit I did not encounter a bug that actually rendered the game unplayable or even required me to restart the game. The technical issues in this game are aesthetic rather than practical.

Once you get past those technical glitches you find a world that, while generic fantasy in the extreme, has a breathtaking grandeur to it. Environments are big and always there is something in the very distance that you just know will be worth exploring. At the same time, the journey to that distant point is never dull thanks to a liberal sprinkling of small-scale points of interest along the way. ArcaniA never feels quite as large as Skyrim, nor does it feel as detailed as Dragon Age’s enclosed environments, but it does offer a healthily-large environment to explore and you’ll never feel claustrophobic, or like the game is forcing you down a straight line; there’s just enough breathing room to make it a joy to explore. 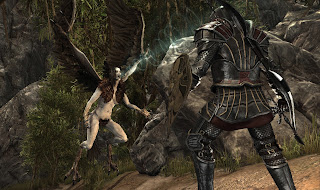 What impressed me most about the game is its consistency. For all its technical limitations, there was not a virtual rock in this game that I felt did not belong where it was placed. From the placement of the monsters to the construction of dungeons with those entrances and exits perfectly placed to maintain the pace and flow of the game, ArcaniA is nothing if not meticulous in design. Transitions between environments is handled cleverly and some of the more exotic locations have still been worked in a way that makes it look like they belong. Nothing ruins an RPG’s world quite like impossibilities in design, and ArcaniA knocks that challenge out of the park.

Unfortunately, for some, it will be difficult to really engage with that wonderful environment, as well designed as it is thanks to some very pedestrian quest structures. To use the first first main quest as an example; after being dropped off at a beach you need to wander up to a tavern, where you’re told that you need to cross a bridge to reach an important city. But that bridge is blocked off thanks to bandits. Before she can help you get past them, the owner of the tavern needs you to go get two barrels of mead from a house in the middle of nowhere. After you do that cross-country hike, she needs you to go get a couple of poison mushrooms to put in the mead. Then you’re ready to go give the mead to the bandits and take them out of the equation giving you access to the bridge. 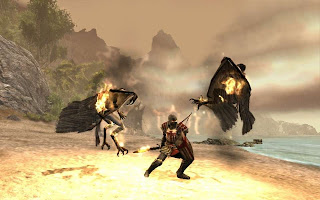 This structure of fetch quests within fetch quests pads out the length of the game substantially – ArcaniA is anything but a short game – but it’s a formula that drives a lot of players batty. I largely enjoy it since it allows the developers to force players to explore every part of the world they’ve drawn up, but here even I found it a little too obvious for its own good. The occasional side quest does help break up the monotony, without being so over the top with little exclamation marks that it gets bogged down in OCD stress. And in fairness to the game it does offer players a couple of different sets of fetch quests to get past some of the challenges. Roughly broken down into “good vs. evil” narrative choices, these alternate quest paths don’t pull a Fable and affect your character’s relationships with other characters and their physical appearance, but they do offer a different way to play based on your own personal tastes.

The game’s action combat system is a generation or so old, but that’s not to say it’s necessarily bad. You’ll want to lock on to the nearest enemy, and then swing away using the melee weapon of choice. There’s a couple of different builds that can work; I’m partial to the archer-and-stealth type personally, and I’m impressed that that build works so well since in many action RPGs it does not. It’s not necessary difficult since enemies project their big attacks well in advance, but it is visceral. 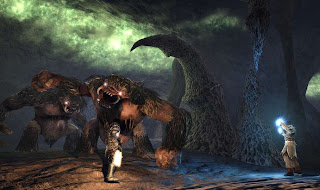 Magic works in nicely. It’s not really possible to play as a dedicated mage without some serious tweaking thanks to a limited range of magic skills and limited uses of magic, but as a strategic supplement to the melee and ranged combat it does add a nice touch.

ArcaniA is a testament to how fast the RPG genre is evolving. It’s only a few years old, and yet it’s already showing its age. It’s a very likable game with its soul in the right place, and there’s a consistency and focus in execution that is genuinely admirable. By the same token it’s let down by some laughable bugs and presentation that is undeniably B-grade.

Let’s chalk this one up as the equivalent of a page turned for pulp fiction fans. It manages to be fun for the genre fans while simultaneously holding very little of worth for everyone else.