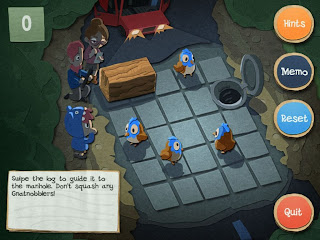 I have a very high tolerance for games that others call clones. I see differences in PlayStation All Stars Battle Royale that set it apart from Smash Brothers games, for instance. There’s even the occasional Gameloft game that I can enjoy despite them inevitably being clones of PC and console games.

But I have a tolerance threshold. Gameloft’s other titles piss me off no end. Circle Entertainment games are another perfect example; cynical cash-ins on the good work that other developers do to create entertaining or even moving experiences. I can’t handle that, because to me it cheapens the artistry of game development, and at a time where development companies of one or two people have the tools to come up with near game-of-the-year innovation, cash-ins are just not acceptable.

Jacob Jones strays far too far towards the latter. This is a brutally shameless copy of the Professor Layton’s games, and as such, from start to finish I found it really difficult to get along with this game. 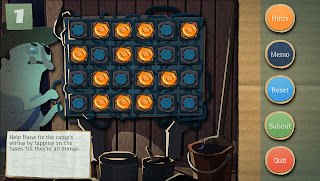 For the first couple of seconds it will be difficult to notice the similarities; where Layton games have a beautiful French-art style, Jacob Jones uses a style of 3D art reminiscent of a early-morning child’s cartoon. Perhaps even a little like a stop-motion toy animation if you squint a little. It’s not bad – in fact the game has a generally pleasing aesthetic, but when you boil it down this game is clearly a cheap downloadable game, and as you’re about to see, given it’s directly comparable to a $50 retail game it’s really hard to see this as anything but the lesser cousin in the longer term.

After the first couple of second the game kicks into a plot – which isn’t even close to as engaging as Layton’s titles as I soon found out – and a little after that, the first puzzle. This is where my initial positive impressions of the game came crashing to the floor and never recovered. The game follow the exact same scoring system, the lateral concepts and the hints and structures of the Layton games puzzles. In fact, for many of the puzzles they are the exact same puzzles I’ve seen before in those games. As such the game was not only a breeze, but deja vu set in to such an extent that I felt no compulsion to keep playing. The sole concession this game makes that it needs to do something different to the Layton games is that it has some social networking integration, allowing players to spam their Facebook and Twitter followers with their exploits.

But the first time I tried that my game crashed, so I didn’t much feel like doing it again. And that left me with a Layton clone with less personality, a weaker plot and relatively unengaging puzzles. Cheap as it is, it’s still one of the weakest Vita games released as a consequence.