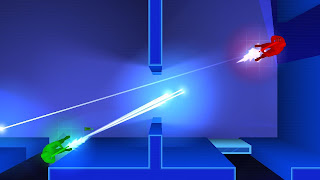 Frozen Synapse is compelling now as it was when it was released on PC two years ago. Within this game is some very valuable lessons that many much bigger developers can learn – sometimes keeping things clean and simple results in greater depth.

Frozen Synapse is a tactics strategy game where the characters are unnamed and almost always short-lived, skirmishes are just a couple of turns long, and “army” sizes can be counted on one hand. On the other hand you could count how many different kinds of units there are – shotguns, snipers, grenades, assault rifles. There is less here on paper than almost any other strategy game you can think of, and yet once you get into the game you very, very quickly realise that it’s not all that it seems.

In case you missed our interview with the creator of Frozen Synapse, click here

We’ll get to that in a moment, but I also wanted to point out the obvious for anyone who’s seen a screenshot or YouTube video of this game in action; this minimalism extends to the visual style, which is kinda-sorta like Tron (and therefore unbelievably awesome), with its electronic blues, greens and reds dominating. Characters don’t really have features; everything looks like it is being surveyed remotely from a distance using weird-spectrum video cameras and the like. 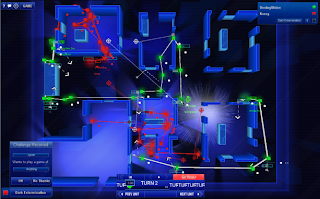 Naturally this all comes together to give people an initial impression that perhaps Frozen Synapse is a little too basic for its good. They could not be further from the truth. While you might be limited in what units there are to use, what is nearly unlimited is the applications of those units.

Players need to be strategic in deciding when to make a dash across an open doorway. Do they tell a unit to crouch down to up the defense at the expense of mobility? And where to they aim? When the fog of war kicks in, the minimal sight arc can lead to complications if an enemy manages to work around and into a flanking position. And why do people need to stress over these decisions so much? One hit equals one dead soldier. With only three or four soldiers one mistake therefore is punished brutally by a competent opponent; it’s beautiful like chess can be beautiful in that it forces people to tap into wells of deep thinking that most of us just don’t use in our day-to-day lives. 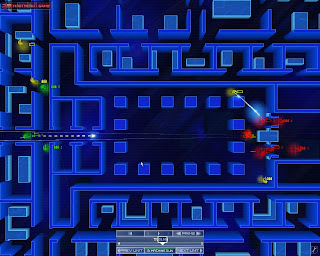 Because levels are randomly generated and limited in size, there’s never really anywhere to hide, and adapting to the unique conditions of every match offers up one of the game’s other greatest strategic challenges. Throw in a multitude of very different conditions for matches and there is a mammoth amount of content available in the online multiplayer. That’s why the game’s servers are still so active all this time after the game’s release. In fact, following the iPad’s release, a newly refreshed set of servers managed to hit a wall of data. I know from the ears with the PC game that the team at Mode 7 are very proactive with resolving server issues, so I wouldn’t expect this to be a long-term glitch.

Speaking of servers, one of the best features about the iPad version of the game is that it works perfectly in synch with the same servers that run the PC version. You’ll be able to start a game on your iPad, go to work, and in your lunch break complete another turn on your work PC. Because the game is turn based and features e-mail notifications for when people take turns while you’re away from the computer (yep, play-by-email!) it’s easy to keep track of dozens of games at a time – which is precisely the way I suggest people play. Comprehensive leaderboards and social features keep people engaged and feeling like they’re part of a community, too. Match-making is quick and easy, and it’s possible to build up friends lists of people you enjoy playing against socially. All-in-all this is one of the more enjoyable multiplayer experiences I’ve had, which is especially impressive coming from an indie developer.

On a purely technical level, Frozen Synapse works like a charm on the iPad. Simple taps replace mouse clicks and the action buttons are nicely arrayed around the edge of the screen. All those commands can seem a little overwhelming to a complete newcomer, but it doesn’t take long to come to grips with what each button does. It’s all nicely responsive and interfaced so well that I can’t see those “must have buttons” gamers even taking issue with this port. It was also nice to see the team at Mode 7 kept the same business model. There’s a relatively large up-front cost to buy Frozen Synapse, but once it’s sitting on your iPad there’s not an in-app purchase in sight.

Mastering Frozen Synapse is a long-term time investment but, much like chess, it’s also relatively easy to learn the basics. I have enormous respect for what the developers have done with this game, because it is in so many ways the perfection of the tactics sub-genre of strategy games.