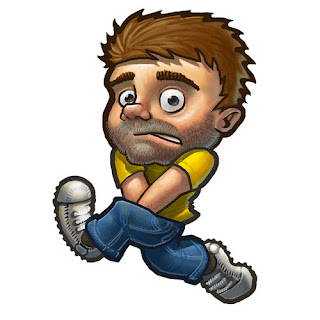 I’m going to admit that I never thought I would enjoy a game about men going to the toilet. Men’s Room Mayhem somehow manages to turn the act of looking in on what goes in a men’s public bathroom into a hugely amusing little arcade game.

The best way to describe Men’s Room Mayhem is Flight Control with golden waterfalls. Like Firemint’s classic iOS swipe-em-up, players need to direct auto-moving objects only in this case instead of directing planes to runways it’s directing little people with bursting bladders to urinals.

If the people come into contact with one another they have a bit of a fight and a pool of blood will graffiti the floor. I can relate to this; it’s something that I’ve certainly felt like doing in public bathrooms in the past. After either five of these within the one level, or five instances of people not getting to the urinal in time (i.e. golden puddles) it’s game over.

So, yes, the game’s premise isn’t exactly what I would call “classy,” but it gets away with it thanks to a generous dose of self-deprecating humour. Characters are animated amusingly, environments are nice and cleanly drawn, and the action doesn’t take long to pick up to a pace when you’re not really going to have time to sit back and consider the actual theme of the game.

The game is broken up into “rounds,” each only a minute to two in length. Between rounds there’s a brief bonus stage where you’ll need to rub the Vita’s screen really rapidly to “clean” the bathroom and then it’s on to the next even more difficult round. Eventually it’s going to be impossible to keep up and then it’s time to enter your score into the leaderboard. 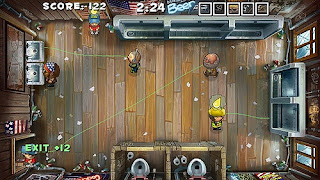 There’s a good score system in place that rewards players who direct the people to “near misses” with one another and maintain “etiquette” by maintaining a good distance between the peeing people. Getting the really good scores is surprisingly difficult, and even more surprisingly, it’s addictive.

There’s a surprising amount of content in Men’s Room Mayhem, with a steady stream of unlocks to earn and new bathrooms to… uh… play in. Later levels also introduce people with unusual-behaving bladders, and there’s even two different ways to play – in addition to the regular game there’s a “blitz” mode which asks players to score as many points as possible in a single short time frame. These small variations between the game modes help to keep the variety up and ensures that the game feels like more than the mobile games that it draws inspiration from. The structure is not without faults – it seems that the game is artificially padded at times and requires a little too much work to unlock the last few levels, but because this is more of a pick-up-and-play title it’s does mean the game will last a few weeks for most people.

It’s also nice to see that the game incorporates trophies and is more than a simple PSMobile game. It might not be a blockbuster AAA-game, but for the low asking price, Men’s Room Mayhem is a nicely oddball title and a nice fit for a portable console.