Everyone knows that Deadly Premonition polarised critics when it was first released on the Xbox 360 a few years ago. I think it’s telling that the critics that panned it looked at it from a technical perspective. The critics that loved it looked at its deeper themes.
The reality is that neither type of critic is necessarily wrong. On a technical level Deadly Premonition is indeed a flawed title, and the Director’s Cut hasn’t really improved things. It still features a very simple art style that would probably have been possible on the PlayStation 2. The game’s combat remains unengaging, and the open-world structure gets frustrating at times thanks to a really, really poor map. When I was playing this game I had my iPad on and a Google-searched map to act as my road guide. It was the only way I could find my way around. 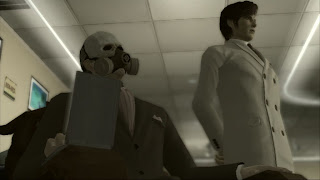 Because of these flaws, anyone that game into the game expecting a horror game, in the vein of the Silent Hills and Resident Evils of the world would have been initially disappointed, I would think. Where these critics get things wrong is in assuming that Deadly Premonition cares about being a game. It doesn’t.
Let me explain. Back when I was at University I studied film theory and the artistry behind film. Each week we watched a film as part of the course for analysis. We weren’t watching films like Transformers or The Avengers. No, we were watching stuff like Citizen Kane, Battleship Potempkin, Chung King Express. These films might not be entertaining like those Hollywood blockbusters (though Chung King Express had me in tears of laughter), but they were far deeper films, and by exploring their artistic themes, they were ultimately more rewarding experiences than The Avengers could ever be.
Deadly Premonition is like those films. It’s a brilliant soup of surrealism, horror and psychological thriller thrown together in such a cleverly-controlled manner that it brilliantly tasks the brain with all kinds of mind puzzles. The game’s main protagonist has an alter-ego that he talks to while investigating crime scenes. This same protagonist sees visions in his coffee. Early on in the game is a cut scene featuring two people at breakfast, and at either ends of a gigantic table, yelling at one another despite the fact that there is no one else in the room. The game is filled with odd notes like these and it creates a deep and abiding mystery; by constantly messing with people’s expectations of what should be happening, the game effectively keeps them on the wrong foot from start to finish. 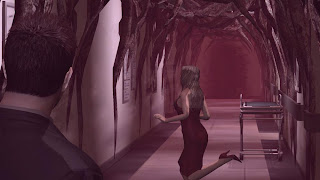 This in turn helps the horror and the psychological thriller elements of the game. Yes, the actual sequences where you’re in a darkened environment taking on the legions from hell are not especially engaging, but they are also segmented from the main game and I get the impression that commercial pressures demanded they exist, rather than the artistic drive of Hidetaka Suehiro, the lead developer.

What the game wants you to focus on is the themes. Not the visuals, which are too primitive to be horrific in themselves. Nor the monsters, which are ugly enough but largely designed to be road blocks between point A and point B. Rather, the game wants players to hone in on what is actually happening beneath this presentation, and like a well-crafted novel, it can be very unsettling. Occult themes combine with an atmosphere of suspicion to leave Agent York (and his secondary personality) completely isolated and without a real sense of assistance. Obviously like a good book I don’t want to ruin the story for you if you haven’t yet played the game, but it does offer up surprises like any good detective story. 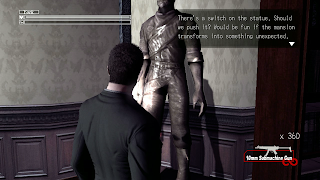 Beyond that it’s the little touches that really do make this game a uniquely artistic experience, and it’s something that the detractors always seemed to miss. The game features a very deliberate pacing and inevitably at the most tense moments Agent York will pause to take a slow draw on a cigarette. This stretching out of important revelations and big scenes is a very deliberate decision to frustrate the players looking for instant gratification. In fact Agent York even takes a moment to take a comic swipe at FPS players. You’re meant to take your time with Deadly Premonition to really understand what it’s getting at, and that means that easily bored people are going to be easily bored.

Also sure to infuriate the easily bored is the game’s intelligent use of repetition to drive home the horror of a situation. As York investigates an environment he will find “clues” that lead him to understand what happened at the scene. Each time he discovers a clue, a long cut-scene will play. Most of it is initially blanked out, but with more clues players see more of it. The repetition helps to ram home the intensity of what goes on in the sleepy town that it’s set against, and while it’s skipable for people with no patience, I recommend experiencing it each and every time. 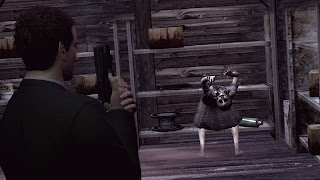 Speaking of contrasts, the game makes very clever use of those to again confound expectations. All kinds of horrors happen in a sleepy, picturesque village. In the most intense scenes and revelations the background music will be a cheery little tune more at home in a Harvest Moon game. It pulls the brain in two directions at once and is a fascinating experience for it.

I get why there are critics and gamers out there that could not get into Deadly Premonition. However, by the same token this game exposes exactly why game critics and gamers in general need to stop pretending the only way a game can be worth playing is if it is “fun.” Games, like film and literature, can be engaging in any number of reasons, and Deadly Premonition is an example of a game that is engaging because it is intelligent and it asks its players to be intelligent while they’re playing it.

Friday 10s: Ten brilliant Vita games no one told you about