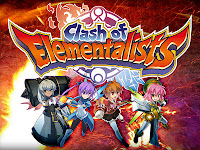 Anime girls with super-powers knocking each other around arenas? What could possibly go wrong?!

Well, quite a bit actually; as I recently found out when I sat down to play Clash of Elementalists from Teyon.

I had absolutely no idea what to expect from the game, but the name actually sounded pretty awesome. Unfortunately, the name might be the best part of this one-on-one combat title.

Clash of Elementalists (CoE) is about… well, I’m honestly not sure what it’s about but it’s got some anime-style gals with superpowers blasting each other all over an arena. If you’re looking for story content, look elsewhere because you won’t find it here. Unless I was sleeping and missed it, there isn’t even a text description of what’s supposed to be going on in CoE and that’s the least of this games problems. 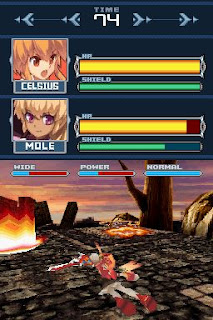 To start with, there are only four playable characters in Clash of Elementalists. Four. You’re probably thinking that there are a bunch of NPC’s that you fight against, but can’t play as right? Nope. Four. Basically, that amounts to a game that can be blasted through in about 20 minutes tops- and that’s stopping for a cup of coffee somewhere in between bouts.

Oh, and those bouts are exercises in pure frustration as the tank-like controls are a beast to play with and impossible to use with any fluidity. It’s an overly complex mess that’s only further complicated by the complete lack of a camera control. Since this is a 3D game, that means that you’ll easily lose track of your opponent and engage in a dash-fest trying desperately to find them before they clobber you. I couldn’t figure out which end was up half the time in CoE. The closest thing I can think of to compare the game to is Virtual On, but please don’t think that this is anywhere near as good as that classic- it’s just similar in play style.

If there’s any saving grace to Clash of Elementalists it’s that the graphics are decent to pretty good depending on what aspect you’re talking about. The characters themselves are fairly nice looking too and the arenas look good and are nice and colourful. I should add though that they’re completely devoid of scenery.

The bottom line is that Clash of Elementalists has some good ideas with each character being tied to a particular element (kind of like Battle Beasts, if you remember those) but is completely hampered by poor everything else.

For a DSi game (which runs fine on the 3DS, by the way) CoE is pretty good looking, but looks will only get you so far in a fighting game where everything else feels either rushed or incomplete. As it is, this is one Clash that you’ll definitely want to avoid.