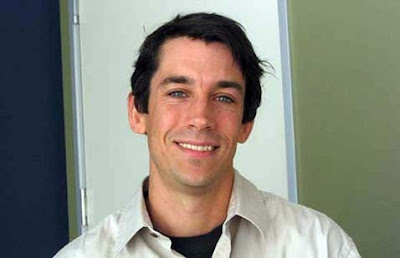 It’s the first time the development team has been exposed to the Xbox 360 platform, and it’s the first major IP that the studio is retaining ownership of. Aside from a small game called Outernauts – coming to a mobile platform near you – Fuse is also the first real time that Insomniac has taken control over its own IP rather than develop on behalf of its traditional partner, Sony. It did that because it now wants to keep control of the IP that it develops, which is something that its new partner, EA Partners, has allowed it to do.

“Being a new IP in a sea of sequels is an opportunity to provide fresh content to players. When I look at comments online I see a lot people asking for something new and I see a lot fatigue when it comes to sequels,” Insomniac CEO, Ted Price, said. “It’s an interesting position for us to be in because there’s a lot of noise around not just sequels but next-gen consoles and mobile and all the other new entrants to the industry as of late. It’s more and more challenging to create new IP and have players recognise it for what it is.” 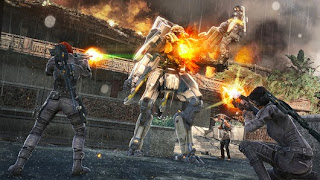 This opportunity to own the increasingly-valuable IP resource was in the end irresistible to Price and his team. That’s not to say Insomniac won’t work with Sony again in the future, he is quick to add. This has simply been a long-term goal of the company and Fuse was the opportunity to realise the goal. “We still have a great relationship with Sony and been a partner of them for ten years, and I have a lot of respect for the people there, and I hope it’s reciprocated,” Price said.

We at Digitally Downloaded can’t talk too much about what happens in Fuse right now due to embargoes (previews and reviews to come in the coming weeks of course), but there are parts of the game that everyone is already aware of – the game is a co-op focused shooter with weapons that are designed to work together and encourage team work.

Hands-on time with the game shows just how well that can work, but by Price’s own admission this is a tough sell – people need to experience the game to understand why it is fundamentally different to the glut of other shooters on the market. “It’s a challenge. I can say what Fuse can do all day long but until people play it it’s hard to convince them of it. I feel that today’s gamers need to see it in action and play it for themselves,” he said. 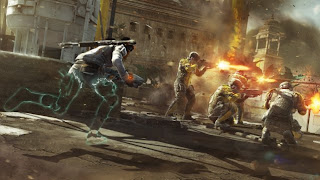 “That’s a challenge we accept and that’s why I’ve been touring the world and asking people to play with the game and experience it for themselves.”

Multiplatform and snubbing the Wii U

So why did Insomniac decide to take a game multiplatform? The simplest reason is to reach out to a new audience and grow Insomniac fan base. This lead me to ask Price whether he felt that it would be impossible for a third party game developer to work on exclusives for a console manufacturer in the future – something he doesn’t agree with at all.

“What’s cool about this industry is that there are always unexpected opportunities and constantly changing. It’s hard to make definitive statements about what one should do, and what one shouldn’t do. It just depends on the game you’re making where you are as a company and ultimately what your long-term goals are.”

Price is also very confident that the console manufacturers will be able to adapt to this market dynamism and remain viable at a mass-market level. He is very confident with what Sony has unveiled with the PlayStation 4, and is keenly interested on the formal unveiling of Durango later on this month. 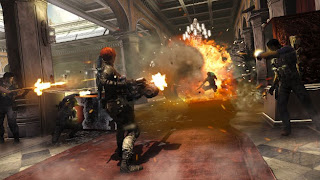 “Despite the critics or pundits in the industry I think the console industry is going to do well. I think as people look ahead to the next consoles and what they offer I think there is going to be a re-energising of the hardcore base thanks to what should appear on the new consoles. At the same time I think the gamer community continues to grow thanks to forces outside of the games industry; the re-emergence of the PC and the rise of mobile is a fantastic occurrence in our industry. It has given the opportunity for more indies to innovate with smaller games that can really push different design processes.”

This raises the last question regarding Fuse; it’s multiplatform, but not on the Wii U. Price has a simple answer for that:

“We have to be selective because it’s easy to start to stretch yourself too thin. So we’re careful about where we go. One of the questions I got a lot of early on was ‘why aren’t you developing for the Wii U?’ and the answer was simply bandwidth. We had to focus on delivering a great game on multiple platforms, but there’s a point where we had to make hard choices, and for us we needed to limit the number of platforms for FUSE.”

It makes sense – again this is Insomniac’s first multiplatform game, and developing for two platforms is a different experience to focusing on one, requiring the team to skill up and be able to stretch resources in different directions. 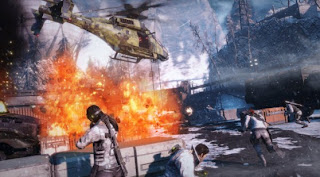 Price is a fan of the Wii U console, and says all it really needs to start taking off is better support from Nintendo itself. Less experimental and filler games, more ‘core’ Nintendo experiences. “As a player what I would love to see is more of those games that I grew up with. Zeldas, Marios, Metroid – those are the games I look for from Nintendo, and I hope more of them come out for the Wii U.”

That said, Price has not definitively ruled out a future port of Fuse to the Wii U. “But we’re not ruling out anything in the future. We are a content creator and we want to reach as large of an audience as we can.”

The weekly discussion: Do you do Kickstarter?