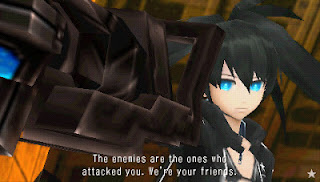 Black Rock Shooter is something of an oddity as a franchise. Each piece of media revolves around one iconic character and her stories take place in separate universes with their own characters. However, since the eponymous lass is the only thing that needs to be incorporated, this means BRS lends itself to a video game adaptation. And simplicity be darned, Black Rock Shooter: The Game is one fine adaptation indeed.

The plot begins as standard action fare, taking place on a post-apocalyptic Earth infested with aliens. What separates it from other renditions of this archetypal story is how dismal the situation is. The earth’s population of seven billion has been eradicated and there are a whole twelve remaining (some of which are killed off in the game’s first few minutes). They’re also entirely composed of soldiers who have dedicated their lives to revenge.

The realisation strikes the player immediately: if species reproduction is impossible and the odds of success are equally morose, what is this faction even fighting for? That’s when the titular Black Rock Shooter shows up and evens things out but even then there’s an air of dismay. Even when the gameplay is exciting and you’re taking on the head alien chiefs, this atmosphere of utter futility and hopelessness makes BSR fairly distinctive. Things don’t get much happier as the plot progresses either. 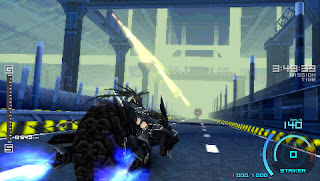 Though most of the story is told via cutscenes, the plot is also integrated well into the gameplay. You’ll get to see transmissions containing banter from your cohorts ala Star Fox 64.
In practice, Black Rock Shooter: The Game seems to take more inspiration from Crisis Core: Final Fantasy VII than anything else. Considering that title’s ingenuity and quality (not to mention the fact that it’s still not on PSN to this day), that’s actually some high praise.
BSR still features enough of its own screwballs and that thoroughly dissimilar plot to set it apart. Rather than expansive worlds, the developers opted for a largely mission-based experience. Each “level” takes place in a different locale such as San Francisco as you tackle several smaller objectives in a linear order. Wander around and you’ll find the usual items, save points, and interactive objects. These regions are often surprisingly sedate, but bump into an enemy and you’ll initiate combat.
Here you’ll find a condensed rendition of the typical ARPG battle system. Rather than being able to roam around the area though, our heroine can only dodge and attack. It’s easy to see how this could devolve into mindless mashing of the attack button and jamming on the dodge button when an enemy gets too close for comfort. That’s likely why the game enforces a limit on your offensive abilities. Attack or dodge too much and the black rocker will overheat, leaving you incapacitated. This means you also need to anticipate enemy attacks (particularly in boss battles) so that you have enough of your meter empty to dodge and then go to town on them. Most battles come down to finding a right “rhythm” of sorts, but there’s still a bit of mindlessness on occasion. 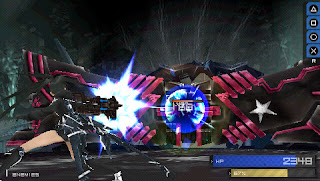 A great deal of Black Rock Shooter’s enjoyment comes from simply powering up the titular hero. Various sprinklings of JRPG elements are strewn about such as unlockable special attacks, upgradable stats, and recovery items. The former two are usually implemented as rewards for the game’s version of an achievement system. There are more than a few of these and they’re level-specific so tracking them all down will take some time, but the instant gratification crowd can forgo them just fine by using solid battle tactics and the standard levelling up.
Occasionally the game also throws in more gimmicky story-based segments such as pre-mission motorcycle riding. They’re even more streamlined than the combat and drag on for a bit longer than they probably should but are still solid diversions that freshen up the usual shooting. Some will view them as superfluous, however.
In fact, there are plenty of minor areas that detractors could fairly cite as detriments. Namely, characterization is lacking until a pivotal point about halfway through the story. This can be forgiven based on the vague nature of the titular hero, but most of your supposed brothers in arms are utterly forgettable. The deepness of combat also varies heavily depending on where you are in the story. The weak minions overstay their welcome for the first few stages and even some of the tougher adversaries are quick to fall to special attacks. 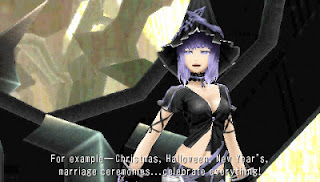 Despite these shortcomings, Black Rock Shooter has a level of focus that transcends its alleged “JRPG” genre into something more fluid. No, it’s not the longest game in the world and certainly doesn’t have the deepest combat system, but the rate at which the story progresses and new aspects are introduced means there’s always a desire to trudge onward. You’re also given plenty of incentive to replay stages thanks to the aforementioned challenges. If you can withhold some criticisms, there’s an exceptional experience beneath them all.
Black Rock Shooter is one of the finest action titles on the PSP to date. The game is so entertaining in its basic form that you won’t care about potential repetition or the basic combat 90% of the time. Unless you begrudge petite motorcycle-riding human weapons for some reason, The Game should have you dusting off the PSP again.

Jonathan Blow: ‘making a profit with The Witness is not our top priority’