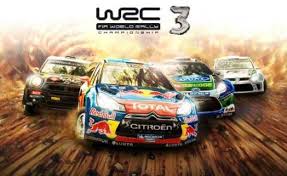 awaiting a true return of the WRC franchise that the now famed developer, Evolution Studios – best known for its PS3 exclusive franchise, MotorStorm – started way back in late November of 2001.

While Milestone is a highly regarded developer in the genre, and recently pleased motocross fans with its MUD – FIM Motocross World Championship – its past two WRC titles failed to stay on the track. With a brand new game engine and a whole lot of promise – does WRC 3: FIA World Rally Championship finally deliver the authentic experience that fans can drift into?

36 Cars, 54 Teams, 13 Locations, 78 Stages and an additional five Special Stages – there’s most definitely enough authentic content here to get hardcore fans’ riled up over. Do you want to take the current top performers in the sport, like Sébastien Loeb and Mikko Hirvonen, through a full championship in virtual replicas of their cars? Of course you can. If you’ve got a few mates over and want to find out who’s the best of the best – look no further than the local Hot Seat mode, and if it’s taking your drifting skills online that you’re looking for, you will find a competent online offering that brings back the clever ghosting mechanics found within the recent MUD release awaits your arrival – keeping the online action’s intensity peaked at all times.

WRC 3 features and additional mode that you’ll likely spend the majority of your time racing in though, which is essentially a career mode of sorts, called “Road to Glory.” Here you create a custom driver and start racing as an unknown entry in the bottom tiers of the sport, earning starts to unlock new races, cars, upgrades and liveries to progress further – making a name for yourself along the way. Expect to find it slow-going from the onset, as your cars’ performance is severely lacking against the competition. Once you win a few races – earning enough stars to acquire a handful of upgrades – you’ll find yourself competing for the lead more frequently. The deep customisation for your hard-earned cars is a welcomed addition too; it’s tough work to acquire them, so you might as well make ‘em yours – eh?

In the opening cinematic, the female narrator poses a question: “What makes a driver a champion? Determination…speed….courage?” Her answer to this question is as follows, “there’s only one thing that can make a difference: control.” It’s a bold narrative to open a game that relies on just that, control, to be a success. Yet, it is in just this aspect where WRC 3’s struggles are found. With the default settings there’s barely a difference to be found when driving on the numerous loose or slippery surfaces in the game: gravel, sand, mud, snow and ice. The only time you’ll truly feel a major difference in grip with these settings is when transitioning to/from asphalt onto one of these surfaces.

There are only two assists available (braking and stability) in-game and neither of them can be adjusted to preference. The stability assist is not a traction control either; it’s actually a steering assist that all but drives your car for you in the corners. When you’re hand braking into a left hairpin turn in cockpit view and find your driver’s hands turning the wheel to the right, it creates a disconnection between you and the game. While this might not be an issue for casual racers, the same cannot be said for the more serious drivers.

If you’re looking for an authentic WRC feel, then you’re going to want to turn these assists off. This allows your cars to slide and drift in a more natural way. This also finds it near impossible to stay competitive though, because the loss of grip from the assists slows you down considerably. While manually tweaking you’re car’s setting prior to a race alleviates some of this, you’ll likely want to adjust the game’s default difficulty down a notch or two to start finding real enjoyment in WRC 3. Once you get the settings right and strap into some of the faster cars, drifting through the winding, rock-laden pathways in Kenya one minute and racing through the high-speed snow drifts in Sweden in complete reliance on your co-driver’s every word to find your path in the white-out the next – WRC 3 opens up to a competent rally cross title that’ll keep your eyes peeled open for hours on end.
The game’s presentation is also much improved over its predecessors. The graphics have had a complete overhaul – giving each location its own authentic look and feel to it. The cars also look fantastic, showing a great deal of damage modelling and road wear throughout the races. There’s a photo mode built into the post-race replays and I spent entirely too much time snapping shots of some of the highlight moments of my races, which you can find in the screenshot gallery in this very review. The game’s audio presentation has also seen an overhaul as well, bringing fantastic engine and road noise effects along with it – immersing you into the game when you’re finding all the right lines. In between races, the electronica soundtrack is sure to have your head bobbin’ while waiting for the races to load too; Milestone truly put forth the effort to make this game great and in many aspects, it succeeded.
WRC 3: FIA World Rally Championship races onto the scene to bring the most authentic dedicated rally cross title to the PlayStation 3 (and Xbox 360). While developer Milestone still finds itself drifting off course at times, it finally delivers a rally cross experience that will put fans into high gear and drifting down the road. WRC 3 shows real promise and I can only hope that Milestone further builds on what it has started here to deliver the adrenaline packed title that fans have eagerly anticipated in the coming years.