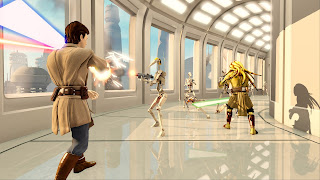 This morning brought some dramatic news: LucasArts game development is no more. With the entire George Lucas company owned by Disney, the decision was made to shut the game division down and move all Star Wars game development projects to a licensing model.

Most of my morning has been spent reading “Disney is evil” comments from the community. On the one hand that makes sense; people are passionate about Star Wars, and to see a beloved publisher of Star Wars games (not to mention the likes of Monkey Island) go down is sad news. It’s also sad to hear there will be job redundancies. But it was the right decision, and I don’t see how Disney could possibly be ‘evil’ for preserving the health of the overall company.

On the most basic level, the acquisition of George Lucas’ company brought a lot of redundancy into the Disney organisation, especially in the game development field. LucasArts’ publishing division, for instance, wasn’t needed – Disney already has a games publishing organisation. Having redundant jobs within an organisation is a luxury that few could afford in this economic climate.

Remove the publishing arm of LucasArts, and what’s left? Development teams that have underperformed for years and have a poor reputation as a result. Think Kinect Star Wars, think Republic Heroes; these are poor games that may well have been profitable based on the strength of the Star Wars brand, but if the reputation of the Star Wars brand in gaming becomes the equivalent of shovelware, then that’s the end of that gold mine.

It’s not that the Star Wars franchise can’t generate great games. We’ve seen how versatile it is in recent years amongst those third parties that have developed Star Wars-themed games. Zen Studio’s Zen Pinball Star Wars tables are incredible. Telltale has done a great job with Lego Star Wars over the years. So no, it’s not that the Star Wars franchise can’t be turned into interesting games. It is simply the case that the modern LucasArts organisation had for whatever reason mismanaged one of the most valuable IPs in the games industry.

Disney is doing the right thing by the franchise by taking control of the license, and by giving it to those developers that can prove they can build quality games around the Star Wars franchise, perhaps we’ll see a return to the glory days of the franchise that brought us the likes of Rogue Squadron.