Capcom re-announces a pair of classics (or a trio, depending), even more Injustice characters are announced, Valiant Comics kicks off Planet Death, and we chat with Project TriForce about replicating awesomeness.

Remakes can be a touchy subject, but when it comes to bonafide classics.. well, it can be ever more so. This week Capcom took the wraps off of some redo’s of games that are pretty much universally loved. How do they look? Pretty darned awesome actually.

Race cars, lasers, aero-planes… and orcs
In case you were firmly ensconced under a rock last Friday, you saw the big announcements by publisher Capcom. Both the NES classic DuckTales and all time great arcade brawlers Dungeons & Dragons: Tower of Doom and Shadow over Mystara will be seeing re-release on consoles soon.

DuckTales made the bigger splash as it has a very comfy spot in many a gamer’s heart and so does developer WayForward, so it’s pretty great news that the developer is behind the remake of Scrooge McDuck’s cane hopping adventure. If you’re a fan, then you need no swaying, but if you haven’t played Capcom’s DuckTales; it’s an absolutely masterfully crafted side-scroller that now has some gorgeous graphics to match (not that it was a slouch back in the day.

Check it out here.

As for the D&D titles Capcom announced, while it’s true that they aren’t the neglected classic that DuckTales was (I believe they’ve seen rerelease several times over the years), they are getting some love in the form of new additions to the core games and a graphical overhaul.

Both games will be bundled together in the Chronicles of Mystara pack and will get a fresh coat of HD paint and a few new modes. The pack will even have GamePad support, as mild as it might be, for the Wii U release.

Take a look at the restored dungeons of Mystara here. 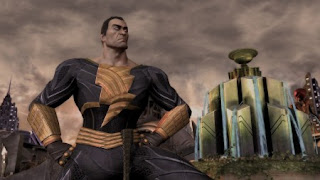 Injustice: Gods Among Us just keeps getting bigger and more stocked with DC Comics’ finest. NetherRealm’s take on an alternate version of the DCU is dark, gloomy, loaded with characters, and pretty darned awesome looking.

The developers just keep on announcing new characters too. With only about a month left till its ship date, Injustice now counts Black Adam (Captain Marvel’s nemesis) and Raven of the Teen Titans among its playable fighters. Publisher Warner Bros has also announced that there will be a Season Pass for the game (come on, you saw that coming) with a bonus- buy in for the SP (which will total up to four new playable characters) and you’ll get some new skins based on Flash Point as a bonus. Not bad at all.

As a big time DC fan, I’m definitely stoked for this one. And if it plays anything like the recent Mortal Kombat reboot, I’ll be one very happy dude.

Read all about it here.

Valiant Comics keep the massive events coming with Planet Death in X-O MANOWAR. The armored warrior, Aric of Dacia, travels to the homeworld of his abductors and enemies and takes the fight to them in the twelfth issue of X-O.

Arguably the flagship book of the Valiant Comics line, X-O is brutal superheroics with a heavy dose of sci-fi. If you’re not reading this book, start with issue #11 as is starts the Planet Death story arc and is a great place to hop on.

Take a peek at the coming war in X-O right here.

I had the opportunity to sit and chat with Drew Seldin, co-owner of Project TriForce a while back. TriForce makes some of the most detailed and high-end gaming ‘collectables’ in the world. In fact, to even call what TriForce makes collectables is probably an insult as these pieces are accurate, game scale replicas of what you play with on screen.

The first piece the company made was a Lancer from Gears of War and there’s been no looking back. Seldin’s New York based company has grown dramatically since then and now counts some of the biggest and best games of today among the properties it produces replicas based upon.

Check out my chat with the man himself, Drew Seldin, here on BG.

Square Enix CEO falls on his sword; why this is sad but positive news