Steel Wool Games is a startup developer that is worth a lot of attention. The team of five that are behind the company – Andrew Dayton, Jason Topolski, Jonathan Hoffman, Joshua Qualtieri and Sequoia Blankenship, come from a film background; specifically a very well-regarded animation house.

Just the early bits of art we’ve seen from the team’s first game, Flyhunter, has us all kinds of excited. If nothing else, this is going to be a game with an impeccable art style well beyond what a team of this size should be capable of. It’s refreshing to see that they’re absolutely committed to the gameplay too – it would be all too easy for an inexperienced team of visual artists to focus on the elements that look good on paper but will disappoint gamers looking for excellence in that interactive bit that film doesn’t need to bother with. That said, with Ripstone, one of the most innovative mid-tier publishers backing the project, we can’t see this game being anything but a success.

The team at Steel Wool Games took the time to sit down and have a chat to us about what advantages their full-time careers bring into game projects, the experience of starting up a new development house, and how they managed to land a publisher contract on their first go.

Digitally Downloaded: What inspired you to build Steel Wool Games?
Andrew Dayton (AD): As a mechanism to launder illegal…. ummm… we love games. Yeah, that’s it. In all seriousness, it’s the fact that the five of us have a real passion for games and that since we have been essentially “raised” together in the same company for years, we have very similar views on art, story and animation. Our day job gives us the satisfaction of working with the most talented, creative geniuses on someone else’s vision. Steel Wool Games is basically our sandbox to create our own worlds.

Joshua Qualtieri (JQ): We love making things that we enjoy. We all had things we worked on as side projects in the corners of our lives to release our creative energies and one day realized that pooling those resources would allow us to make something that much better than what we were doing on our own.

(Qualtieri’s other side company is ZombieSmith. It is an award winning Table top miniature gaming company. The other members of the Steel Wool team have contributed heavily to it. Andrew and Josh created a short animation based on ZombieSmith’s Quar world in six weeks with students from Ex’pression College (some of whom are Steel Wool contractors).

DD: How are you going to manage being a game developer with having a full-time job? Why not focus on developing full-time?
Jonathan Hoffman (JH): We’re just getting our feet wet, trying to learn what it takes to make a great game. We also love our jobs and want to continue to work on amazing films.

Jason Topolski (JT): We keep the two 100 per cent separate. We put together an amazing team of animators, modelers and shaders that we have trained outside the studio. None of us have any desire to leave our current roles. There’s a pool!

DD: Your team comes from a background in film and animation. What advantages does that background offer you when it comes to developing games?
JH: We hope that years of working on movies will help us to tell a better story. Our team of five comes from different departments specialising in different aspects of production – but the most direct application comes through our Animation Director, Sequoia Blankenship, who is going to bring his feature film experience to our games. Our eye for all other phases of production, be they lighting, shading, or modeling, are also informed through years of work in the film industry.

AD: Our ability to objectively problem solve. Every film has inherent technical and creative challenges, so does every game. How you approach tackling them and how you setup your pipeline can make all the difference in the world.

DD: I assume that your games will look incredible, but how are you managing the coding to ensure the games are also fun to play?
AD: We have two programmers working on the project with backgrounds in game programming. We have a technical background ourselves so it’s not so daunting because we can translate some of our technical understanding from one medium over to the other to a degree. We are leveraging people we trust such as our publisher to hold our hands a little bit in the aspects of game production we aren’t experienced in. It’s trial by fire for sure but we have faith in ourselves and our crew to overcome the obstacles as they come. If we hit a roadblock we can’t figure out, we will find someone who can to help! Bottom line is we know pretty with a good story is meaningless if it doesn’t play well.

DD: What differences have you found in the creative process with making games compared to film?
JH: The biggest thing of course is gameplay. We’ve got to figure out how to make something that is engaging both in story and in game mechanics, and figuring out what works and what doesn’t work is still new to us. But we’ve learned how to iterate and how to know when something isn’t working right, so despite the fact that its a new problem our process for solving that problem is quite familiar.

JQ: The elephant in the room is of course gameplay. However, I don’t think the processes are that radically different. Logistics-wise the pipelines are very similar, asset creation and iteration are almost identical, story is story no matter what you are creating and, hopefully, because of that we can really concentrate on that elephant in the room.

DD: Can you outline for us what kinds of games you are working on or have planned?
JQ: We have ideas that range from platformers to fighters to RTS strategy. We also have plenty of bizarre concepts that nobody should ever make. Ever. …Maybe. No. Never.

AD: Everybody on the team has a couple great ideas in their back pocket. We have a few really interesting ideas floating around. Jason’s game ideas are usually rather brilliant but nuts in a Beautiful Mind sorta way!

DD: You’ve inked a publishing deal with Ripstone, how did that relationship come about?

(Check out our interview with Ripstone here)

AD: A friend of a friend had friends who happened to be Phil and Leo at Ripstone. We talked early on and we knew we wanted to work together but initially the game we wanted to make first was out of range budget-wise. After a bit we re-calibrated and realized it would be much better and smarter to start with a smaller project as our first title. Josh and I were sort of discussing things and mentioned, “Hey we should call Phil and Leo and see if they are still interested”. As it happened, they called us the next day or so asking if we were going to come down to E3. We had just been to GDC so we were a little burned out and weren’t going to head down. When we told them that we were interested in making a smaller game, they hopped on a plane from L.A. to Oakland and we spent a full day pitching to them at Josh’s loft. At the end of the day we had a hand shake, gentleman’s agreement and that is where this all officially started.

JQ: Life and business success is all about who your surround yourself with. We talked to Phil and Leo very early on and really liked them and always had them in the back of our minds. I think it really came down to Phil and I sharing a love of the original X-com. Literally the day after we decided to go ahead and start doing some smaller mobile games they shot us an e-mail. Connections are everything!

DD: Why did you decide to work with a publisher rather than self-publish?
JH: A publisher provides more than just financial support (which, lets be honest, is really nice). They help us with advertising, with connecting us to other game-makers and in giving feedback all throughout the process. Since we are admittedly new at this game making thing, having the support of a savvy producer is pretty crucial.

JQ: While we have all been playing games since we were wee ones we really wanted someone to help guide us and give a little hand-holding as we worked on our first titles

DD: What growth plans do you have for Steel Wool Games?
AD: We really aren’t focusing on growth right now. We have a core team of contract artists and coders, our goal is to make a really fun first game and to keep the band together so to speak. If the needs of any future projects demand some growth, we will address it then. I personally like the concept of smaller intimate teams. When you have people that you trust and care about, it makes it so much easier to deal with the grueling grind of production. 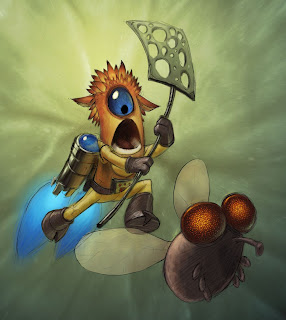 DD: What games inspire your own approach to game design?
JH: We’ve played a lot of games, so it’s hard to point at anything without passing over a hundred other inspirations. Since we’re primarily making a platformer, obvious inspirations are classic games like Mario and Super Metroid, although we’ve drawn additional information from more modern takes at the genre like Super Meat Boy. Basically we want a game that’s as funny as Day of the Tentacle but as tight in its controls as Meat Boy.

JT: Double Fine and early LucasArts games have been a big influence.

DD: Finally, what games are you playing at the moment?
JH: Just finished Heart of the Swarm and my first play through of Castle Crashers (such a fun game – love the throw back to the TMNT arcade play). Keep going back to Mark of the Ninja too – such a slick game. Oh, and Mechwarrior online.

AD: Planetside 2. SOE proved that you can make a free-to-play AAA title. I am quite sure I have spent more money on SC than I would have if I just spent $60 for the game itself. I always throw on SC2 whenever I have an urge to Marine bio-ball! Hawken, that game is gorgeous. Josh: Planetside 2, RAD Soldiers and I always have some random Kairosoft thing I am playing.

Tomb Raider; a commercial failure at only 3.4 million sales