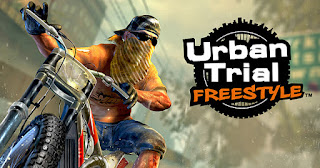 In 2008, RedLynx released Trials 2: Second Edition on PC, bringing the tough-as-nails “Trials” action that we enjoyed in previous Flash-based games into a full-fledged release.

It went on to release multiple Trials titles exclusively on XBLA over the next few years – improving the formula with each new release. Many have tried to recreate RedLynx’s formula, but none have succeeded… until now. Tate Multimedia has entered the mix with its PSN title, Urban Trial Freestyle, and not only can it stand proudly beside RedLynx’s Trials series, in some aspects, it even races ahead of it.

Before jumping head first into this review, I’ll get the obvious out of the way – I’m a huge fan of the Trials series. So much so that I even find myself whittling the hours away with shoddy iOS knockoffs at times. The intense challenge of the trial-and-error gameplay found within the genre strongly fits my personal gaming tastes. I had high hopes for this title going into it, but I’ll admit that I also had a fair bit of scepticism firing it up as well. The physics and controls have to be perfect to pull these titles off correctly, especially in the wake of RedLynx’s exceptional Trials Evolution. Could Tate Multimedia actually pull this off? Oh, you can bet your bottom dollar that it can!
Urban Trial Freestyle isn’t just a simple clone. Instead, Tate Multimedia took the basic formula and injected its own unique flavour, character and style into it. See, it’s all found right within its namesake: “Urban Trial Freestyle.” Let’s break this down piece by piece – shall we?
Urban 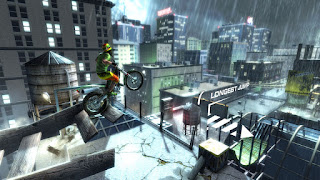 “Urban” is its setting, but it is not just any setting, it’s the setting that gives the game its explosive sense of style. The action found within these urban environments is dynamic; meaning that each level is absolutely jam-packed with action. Bridges collapse right out from under you, cop cars skid into your pathway, creating new obstacles to overcome and there’s even one breath-taking action point that finds you in admits a full-on highway collision that involves a speeding semi-truck coming to an instantaneous metal crushing halt. These points are controller gripping intense the first time witnessed, but brilliantly, these points are the fundamental building blocks of each courses’ layout. When you are trying to shave seconds off your currently fastest track time – in the hopes of placing your avatar atop the leaderboards for all to see – the tracks are still the same with each sequential run.

Where RedLynx’s Trials Evolution took that series outside of a warehouse and into the world for the first time, Urban Trial Freestyle puts you right smack dab into urban environments; one’s that are filled with denizens who don’t like you ripping it up either – throwing boxes and flaming barrels in your path. There’s a wild, crazy sense of adrenaline junkie action to be found here and it keeps you coming back for more.

Graphically, the game is impressive. We’re not talking MotorStorm Apocalypse visuals here, but what’s here far exceeds expectations, especially for a downloadable title. There’s so much happening on screen at times that it’s surprising that frame rate drops aren’t an issue here. Even when large construction equipment is moving around, pedestrians are frantically running from your path and explosions are happening just in front of you simultaneously – the frame rate keeps truckin’ along without a hitch.
Trial 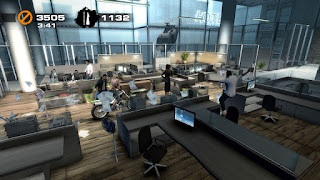 If you’re still unfamiliar, Trials is a sport where specialized motorcycles are used to manoeuvre through either natural or constructed obstacle courses. Very few can succeed within this highly skilled sport and in videogame format, the extreme difficulty and frustration has been carried over – staying true to the sport’s roots. Getting from one end of these deceptive tracks to the other is the primary goal. It sounds simple in theory, but getting there as quickly as possible and with fewest amounts of errors is what separates the winners from the losers. The fine-tuned controls and physics give you exactly what you need to achieve this, but it’ll take practice and skill rise to the top.

Chances are, whether you follow motorbike sports or not, you’ve likely seen pictures/videos of someone on a motorcycle stunting 40+ feet in the air. This is “Freestyle,” and it’s where Urban Trial Freestyle finds its sense of character and unique flavour. Firstly, the game’s protagonist is a trials junkie that you can style to your liking with the cash bags found scattered (and hidden) about each course. But it’s also how the game’s stunt system is built in the game that changes the typical formula we’ve become so accustomed to, and most importantly it’s a key feature that makes this title shine so brightly. The main game finds two types of courses: Timed and Score. Timed runs are self-explanatory, but the Scoring-based courses have Stunt Areas found within them: Longest Jump, Highest Jump, Precision Jump, Speed Check and Flip Meter. While your rider will automatically perform a trick within these areas (e.g. Can Can, Knack Knack, Superman, etc.), it’s your job maximise the actual stunt within it. These areas also tease you with the current world record holder’s avatar and maximum distance/score – always forcing you to push the limits within each area. The tracks are expertly designed around these areas, so if a world record seems impossibly out of reach, there’s most likely a line built into the track that you’ll need to find to give the record a run for its money.
Another major factor to gaining top scores is bringing the right motorcycle along with you for each course. You can purchase upgrades that give your bike an increase in power, handling and acceleration. But, an increase in one area will always decrease performance in another, so purchasing and tweaking your settings can really give you an edge if it’s the world records you’re chasing. 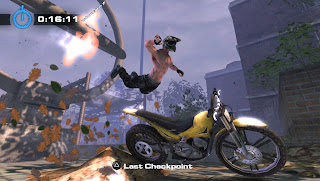 A few extras tracks can be found within the Challenge Mode, which task you with fun things like getting as far as possible in a level with a limited amount of fuel, pushing a soccer ball through a course, as well as riding through a level with screwy gravity effects. While there isn’t any actual online multiplayer found within the title, the leaderboards being seamlessly integrated into the game ensures that you’re always chasing someone’s records down, by placing their avatar and record right before each Stunt Zone, as well as implementing the record holder’s ghost in the Timed-based courses – making the entire game ‘feel’ like a multiplayer experience at all times.  Also, each track has a “Track Master” and trying to achieve this prestigious position on all 42 levels within the main game will keep you busy for a verylong time.
Listen up “Trials” fans. There’s a new competitor in town and it goes by the name of Tate Multimedia. While RedLynx has dominated the genre for years, Tate Multimedia has ripped its high-flying, death-defying and action-packed Urban Trial Freestyle onto PSN, and it demands your attention. From its intense dynamic action to its challenging, yet addictive gameplay – the “Trials” formula has been evolved yet again. So what are you waiting for? Let the trials begin! 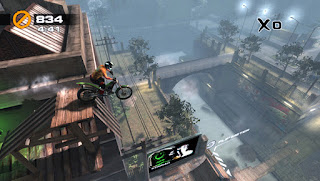 Urban Trial Freestyle for the Vita allows you to take the same action-packed gameplay found within the PS3 version of the title with you wherever you go. The addictive online leaderboard multiplayer featured within the title fits the 3G capable Vita models perfectly, but the dynamic action had to be toned down somewhat to fit the portable – losing a small amount of its style in the process. Still, the stunt zones and unique gameplay style are still very much intact here and the addiction level still remains sky-high.

Tate Multimedia also shaved $5 off the of the Vita version’s price tag, so if you’re itching to take Urban Trial Freestyle with you on the go, it’s a bit lighter on the wallet than its PS3 brethren as well.