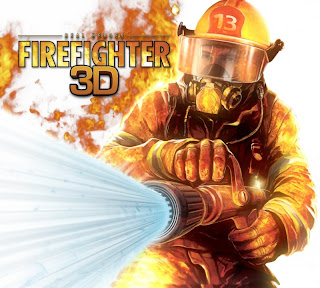 I know I am in for a bad time with a game when I quit out of the tutorial in frustration. Welcome to Real Heroes: Firefighter 3D.

Firefighting is an interesting concept for a FPS-style experience. It’s bloodless (which is a nice change for a genre that typically rewards headshot kills) and if it was done well, there is a level of engagement with the game world that makes experiencing the events of the game far more immediate, and therefore personal. Applying this to the life of a firefighter there could be, in concept, a real intensity to busting down doors, carrying smoke-affected victims from burning buildings and trying to hold back the onslaught of billowing flames.

It’s a dangerous job, and firefighters are genuine heroes, and so I fully applaud any attempt to demonstrate the realities of their very dangerous lifestyles to a broad audience. Unfortunately for Real Heroes, instead of giving players the same emotional engagement that made Ladder 49 such a compelling film, the concept of this eShop download is the only positive thing I can say about the game. 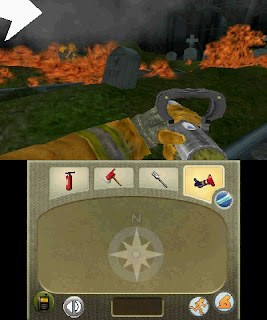 Bar none, this is the worst-looking game on the 3DS. It’s a port of a Wii game, one I never played and now never plan to, but it can’t handle the 3D rendering and the frame rate loves to crash for no perceivable reason whatsoever. Turning the 3D off results in a smoother experience, but given that characters are about as detailed as three animated blocks stacked on top of one another and the environments are as bland as a PlayStation 1-era game, a bad framerate manages to be the least of this game’s visual aesthetic problems.

Even the flame, which really should be intense and threatening as the game’s primary “enemy” is more like a warm glowing BBQ fire. Barely more than cardboard cutouts, the flames of Real Heroes: Firefighters look like training dummies used by real firefighters in drills. As a result, even in the most intense of dangerous situations, it’s hard to feel genuinely threatened. That is the most disappointing part of the game, really. For a game that is all about demonstrating the very real dangers of firefighting to make firefighting look like a pedestrian family activity means nothing less than a failed game.

The game’s characters are also incredibly dull, and badly voice acted considering the game advertises itself as being voiced by ‘recognisable names.’ It doesn’t matter though. It could have starred Nolan North and it still would be impossible to care for the characters or their situation thanks to that woeful presentation. 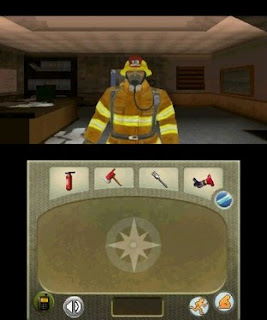 Despite the presentation being so bad that it genuinely hurts the entertainment value of the game, Real Heroes could still have been an average game if it played well. It doesn’t. To highlight this let me explain my experience with the tutorial. After I found myself in control, I started walking around. My firefighter was so sluggish that it felt like I was swimming through jelly. “OK” I thought to myself, “I’ll just run instead.” Three taps later on the touch screen icon and the game finally recognised that I want to run. I’m not sure the icon did much though because ‘run’ to this game is still a slow plod to any game out there on the market.

Aiming was just as slow, and I felt like I needed to push down far too heavily on my touch screen to actually get the aim to change direction. Actually fighting the fire and rescuing people worked fairly well in the tutorial. It was dull – thanks to ugly fire and empty environments – but it worked.

Then came the advanced tools tutorial and here’s where I quit the tutorial. The saw tool does not work. I’m told to line the blade up with the outline of a shape and cut through it. Regardless of the direction I moved the blade in, it would not ever cut. I was stuck. I quit.

Thankfully the tutorial isn’t necessary to actually play the game. After dropping out of the tutorial I was able to play the main game missions. Right up to the bit where I needed to use the saw, of course.

I doubt I will ever finish the game. Even if I could handle the horribly boring ‘action,’ the incredibly clunky controls and the ruinous presentation, I cannot handle broken gameplay elements. Not when there’s often time pressures and failure (which is common when you’re relying on luck for the game to recognise what you want to do) means a long trek back to a checkpoint.

Sorry, firemen of the world. I would love to recommend people play a game that helps to explain the challenges and dangers inherent with your careers, but this is not the game.