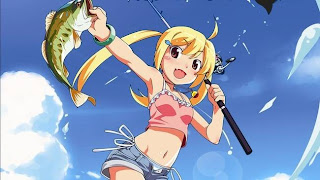 Fishing is not the world’s most entertaining activity. With all due respect to the sport, you need to be a special kind of person to be able to sit down all day throwing a wire into the water and hoping that something you can’t see grabs on.

I’m a terrible fisherman, so I had thought that perhaps that’s the reason the sport does not do much for me. Then I realised that aside from fun little minigames in JRPGs and the like fishing games are not that much fun either. That’s when I realised it was just a dull sport (and I just know I’m going to get heated comments for that one).

So I think this is the finest of compliments that can be directed at Let’s Fish! Hooked On: I really had fun playing it. It’s by no means flawless, but it really does try to take the basic idea of fishing and turn it into something charming. 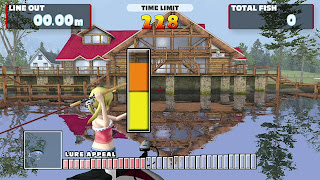 Presentation is what brings Let’s Fish! beyond its peers. As the title suggests Let’s Fish attempts to channel the kind of style that Sony’s Everybody’s Tennis and Golf was so carefully copied by Gameloft for Let’s Golf. As part of that family of games, Let’s Fish sits somewhere in the middle. It has a better personality of its own than Gameloft’s soulless clones, but it lacks the precision of Sony’s titles. There’s the odd moment of graphical clipping and the the characters are weirdly plastic. That aside this is a bright, happy game and for fishing games, going for a cartoon appeal is far more accessible than trying to accurately recreate fish when most people wouldn’t care less what they looked like. 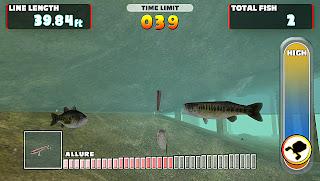 After selecting the right lure for the kind of fish you’re looking to catch the job is simple: cast it in, attract the attention of a fish by moving the lure around, and then real it in through a series of quick time events (QTEs). Every so often a hooked fish will try and escape and you’ll need to push a directional button in the correct direction or the fish will put excess strain on the fishing line and quite possibly break it. Don’t reel it in fast enough and the line will go slack and the fish will become unhooked.

All these actions are comfortably familiar by the time you’ve finished the tutorial, and not once did I feel like the game was cheating me out of a catch. If the fish got away it’s because I made a mistake. By the time I was attempting to catch fish that I could conceivably fail at I was completely comfortable with what I was meant to do. 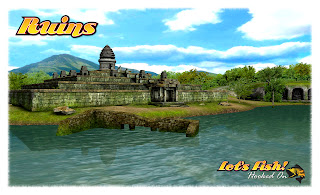 Bigger fish are harder to catch, naturally, and the game does start off pleasantly easy before ramping up in difficulty to become potentially frustrating; as gently as the difficulty is there is enough content to eventually challenge any skill level. There are two ways to play; a standard story mode with stories that are not worth reading, and a ‘challenge’ mode that works a little like the iOS games that are all the rage these days. Each level ranks performance on a three-star scale, and earning three stars on all of those challenge levels will last longer than the story mode. There’s online leaderboards for the challenges which is a nice touch as well.

Though the only real difference between environments is the kinds of fish to catch they represent a lovely range of locations around the world, and the different environmental effects can affect where in each environment the fish can be caught. There’s some challenge to figuring out where there best fish are hiding each time, and I’m guessing that is a fair reflection on the real sport of fishing… though in the real world it’s not a skill I’ve ever learned.

I would change nothing about this game overall. It’s genuine fun, even if it’s not the kind of game that’s especially memorable. A bit of tightening of the game’s mechanics and a sequel would be essential.