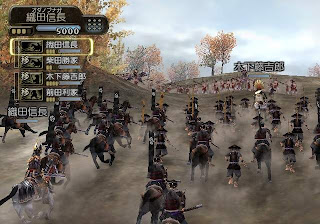 I don’t really understand why Tecmo Koei let the Kessen franchise fade into obscurity. There was so much potential in the basic idea of meshing Warriors-style action with a more cerebral strategy game, and as Kessen III proves, that formula is still genuine fun today.

Perhaps it was the commercial challenge in selling the formula that spelled Kessen’s end. Tecmo Koei tried to bring PS3 gamers that strategy/ action mix in Bladestorm, and that game didn’t exactly set the world on fire. Other attempts to merge two very different genres – such as the Heroes Under Fire series on the Xbox have likewise met with commercial failure but critical success.

Whatever the reason for this consistent lack of interest we can assume that Kessen is a dormant franchise, and as such we should simply enjoy Kessen III as the finest example of the merging of strategy and action. 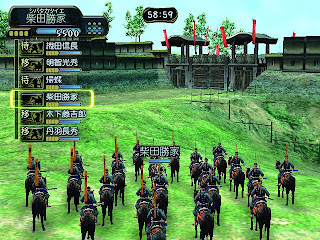 The basic idea of Kessen is to take a couple of units from feudal-era Japan (comprised of a few dozen soldiers and a single hero in each unit), and direct them around a battlefield to attack enemy heroes and capture key objectives. Players only have direct control over one unit at a time, but they can direct the other units under their overall command to move independently – either to specific locations or to attack specific targets.

Within that basic framework are some of the typical trappings of the strategy genre: certain units have a decided advantage over others and there’s some benefits to being the one that initiates the attack or attacks from higher ground. Units will fight for themselves, or you can take greater control over their fate by taking control of the unit in combat and using the hero to issue beneficial rallying cries to boost unit performance.

It’s even possible to take direct control of the hero and wade into the melee personally. That part of the game plays out like a poor mans Warriors game, and it’s a real low point in the game; as an action strategy game it’s compelling and quite exciting. Units die quickly and it’s important to be ready to react at the slightest change in battle conditions. But as an action game, it’s horrible. Thankfully that direct combat side of the game is largely optional. 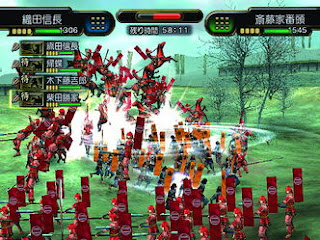 Outside of battle you can tweak unit equipment and naturally building up the ideal mix of units becomes a key challenge in getting through the more difficult missions.

The only real issue here is it’s difficult to really connect with what is going on in this game, and so it becomes a little hard to care about what’s going on after a while. The visuals are primitive (to put it nicely), and as such the characters have very basic personalities; they might have the same names as the later Samurai Warriors characters that people would love, but and the voice acting is truly woeful. Back in the PS2 era Tecmo Koei Warriors and historical games were dubbed (no Japanese voice track for people that prefer to play games the way the developers intended), and the English voice actors sounded more like random people off the street than anyone you would actually pay to do voice work. It’s not charming, it’s not entertaining and I am so glad that Tecmo Koei later learned the value of making games with personality.

The lack of production values aside, Kessen III has a compelling combat system backing it and it still largely works as casual strategy game. It’s such an underdone genre now that it’s worth a look into for its sheer novelty.

And who knows? Perhaps enough people download it to justify a next gen reboot to the franchise. Fingers crossed.