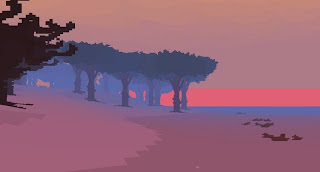 Next in the series of games as art is the somewhat minimalist Proteus recently released on the Steam store.

The game can, and must inexorably be compared to Dear Esther. Why Zane would you compare a game against another right off the bat you might ask? To do that is a misrepresentation of a game since you paint it in the light of another rather than allowing it to shine by itself on a pedestal. This is fair enough and I hate such things being done under usual circumstances, but I have to justify a straight comparison to Dear Esther because Proteus’ concept is exactly the same: it involves nothing but walking around a picturesque island. There is no interaction other than movement. The player is confined to what is essentially an invisible camera on invisible legs with no functioning arms. Very much like Esther, perhaps, even in mechanics – but it is less than Esther. There is no melancholy British man leaving metaphorical clues washed up on a beach for you to unravel with your bookishness. There is no story, just an island with some random plants and animals to examine. But before we get to straight up comparisons we’ll go into a bit more detail before we compare and contrast the two. 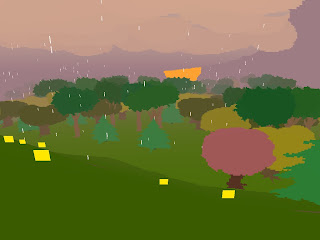 It is difficult to explain how you play this game other than to tell you to walk around it and enjoy. It’s not a game in the sense that there’s a score to be beaten or princesses to be rescued from another castle (dammit Toad), it sells an experience rather than a sense of competition or even accomplishment. Without spoiling it for you, islands are randomly generated and quite small. An island can be walked across in five minutes and perhaps triple this is enough to explore all the life and geography the particular roll of the dice has generated in monotoned 8 bit fashion.

Most notable about Proteus as a game is the sense of sound. Almost every object in the game makes a specific beat on a specific Moog instrument depending on how close or far away you are from one or a combination of plants, animals and landforms – taken together the island often sounds like one of the experimental tapes from some of the stranger bands I enjoy. From my specific musical perspective the islands sound like late-era Talk Talk Mark Hollis with a bottle of pep pills spiced with the occasional tranquiliser sitting at a synth with too much time on his hands and robbed of all the bitterness of the world he so often portrays. In this Proteus offers us a new and interesting take on player interactivity and musical environments. Before I end this paragraph, without spoiling it, I will tell you that there is a way to progress to different incarnations of the island. It just took me a lot of experimentation before I worked this out. 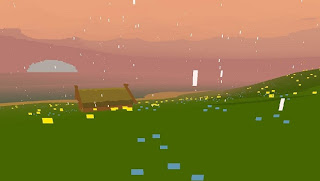 With literally all of the game mechanics out of the way in a tidy 200 words, I must begin the comparison to Dear Esther. I find these games reveal a lot about the other when ingested as a pair. Both are voyages of exploration and searches for meaning around an enigmatic island, and they accomplish so much together, but one more than the other.

Dear Esther was a riddle wrapped in a mystery hidden in deep layers of metaphor and detective work. It is a feast, for both mind and eyes. To this day I am trying to decide what interpretation of the events of Esther I like the most – my own or the ones created by other fans, or even a combination of the two. I searched for meaning in the sinewy narrative – and like a piece of tendon caught in my incisors; I will not rest until it is exposed. Esther you could say was a search for meaning in a world where meaning is subjective and capricious. It was a delight, however, Proteus is not.

Proteus is decidedly thin. The graphical style supposed to give off an air of cleanness and minimalism only made it a dull boring texture. I give them props for experimentation, something many devs won’t do in a cutthroat industry, but the experiment was for me lacking. The voyage in sound was interesting but not enough to carry any substantial interest. To me, this is merely a novelty of a game. Proteus feels like it should have been released as a bonus disc on that Mark Hollis-penned album I talked about above. It feels incomplete. I understand that it is supposed to be refreshing and relaxing, and as much as it is like a walk under the trees on a hot summer day is, it is not. I have a very large and picturesque lake not 20 metres from my amazingly low rent house with a trail running alongside it, and today it was a departure from the azure waters. It was vividly chocolate coloured with whitecaps with roaring white horses galloping along the surface.

I could have been soaking in the sun, but instead I was playing this, and this was not a substitute for it. I have read other reviews, and those others profess some childlike wonder to this game in which only a child could be enthused by it. There is no meaning in this world, where meaning lies in every engraving in every cave in Dear Esther. Proteus is a one dimensional wonderland where nothing of value is gained or lost and no grand experiences or adventures come from it. I said previously that Esther was an oil painting brought to life. I do enjoy games as art, however I wish for something more substantial to chew on. Proteus is a sugary after dinner mint meant to cleanse the mouth–rendered worthless by something as simple as brushing your teeth, or even having a walk along a wonderfully muddy lake on a blue summer day.