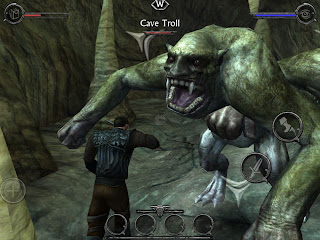 If you squint, Ravensword looks like an Elder Scrolls game. It shares the breathtaking sense of scale in its visual art style as its clear inspiration, and it goes out of its way to cultivate a sense that the game is as non-linear and open as anything from Bethesda.

And I contend that that is a very poor decision on behalf of the developer, Cresent Moon Studios. Like Aralon before it, Ravensword feels like nothing more than a cheap clone of Bethesda games. It’s not quite as bad as a Gameloft or Circle Entertainment knock-off, but nothing about Ravensword stands up and says “this is proof that iOS gaming can be as compelling as console titles.” Not when it’s so inferior to the games that inspired it.

It’s not that Ravensword lacks for entertainment value though, because it’s really quite engaging. At any given time players will be wandering around the standard fantasy environments, slicing and dicing a limited (but attractive) range of enemies and juggling a single “main” quest with one or two side quests. It’s a very linear experience and players are gently guided through the story at a snappy pace, but because environments are so expansive there is a nice sense of scale to what you’re doing. 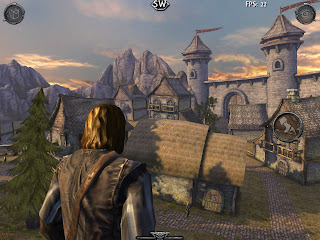 Combat works much like an Elder Scrolls game. A generous lock on prevents unnecessary deaths, and simple virtual buttons are arrayed nicely around the screen to allow players comfortable control over their hero. As heroes level up there’s a limited range of specialisations available to customise your hero into the standard magic user, sneaky rogue and brutal warrior types. There’s plenty of loot around to ensure that characters are decked out in decent gear quickly, and indeed I would suggest that an update should balance that out a bit better because as it stands the game is not that challenging.

All of it is nice, and I really can’t emphasise enough just how good this game looks in motion on the iPad. Purely based on the visuals this looks like a game that could compete with the B-grade console RPGs, such as Risen 2 or Two Worlds 2.

It takes about two hours for the game’s weaknesses to become apparent, and it’s about then that the game stops offering that wow factor. The central city is almost empty of people, and that lonely soul that you come across from time to time has nothing interesting to say. There are no characters in this game that have anything interesting to say. The best you’ll ever get from Ravensword is a Non-Player Character (NPC) telling you which location to visit next. 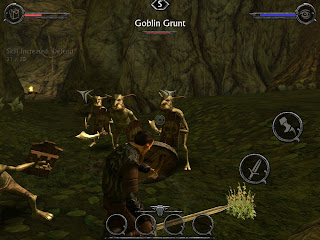 There’s also no variety in the game. The secret strength of the Elder Scrolls games is the non-combat stuff that you can do. I spent hours and weeks building up a library of books filled with interesting stories and lore in Skyrim, for instance. I came across one book in all my time in Ravensword, and yes, it was interesting, but one book is hardly enough to build a compelling in-game history. Ravensword also takes a half-hearted effort in giving players something different to do from the combat a couple of hours in with a dinosaur-riding sequence, but that part of the game is genuinely painful in execution.

It’s also impossible to do some of the things that a typical Elder Scrolls game lets you do to help draw players into the universe. I can’t kill civilians in Ravensword. I can’t become a property owner. There’s only the one city to visit, and only the occasional building elsewhere. In other words, I don’t get to Role Play in Ravensword, an absolutely critical component in the success formula for western RPGs that the game so desperately wants to be like.

And many of the bugs of an Elder Scrolls game have come through into Ravensword. I had to delete the game and redownload it at one point.

If all of this sounds harsh, it’s because Ravensword is an unfortunate experience. It looks and acts like an Elder Scrolls game, but it lacks depth. It’s got a big world to explore, but it’s a dull experience exploring it. It has some nice combat systems, but lacks variety in enemy type.

In other words, it’s a low-budget title that unwisely thought the best approach would be to be an inferior clone of a truly great series. Unfortunately Ravensword might be the best looking game on the iPad for serious RPG fans, but in every other way it plays like the kind of mobile title that is derided by so many console gamers.

– Matt S
You can find me on Twitter: @DigitallyDownld
And Game Center: WaltzIT