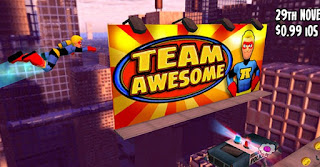 There’s just something to be said about having a sense of humour. If you’re a person who lacks one – stop reading right now. Strip the sound away from Team Awesome and it’s a simple, yet fun auto-running platformer, but kick that sound on and it’s one that will have you bursting out laughing during your crowded train ride home from work – courtesy of the hysterical voiceover narration from the Duke Nukem guy, Jon St. John. Can you feel all of those people turning to look at you right now?
The Edis Brothers are well known for crafting games that are simple to pick up and play, yet pack on the fun. You can spend hours enjoying the team’s free flash games off the Internet, but if you want your fun on the go, they’ve brought some of their best titles to mobile platforms. With games like Diversion and Crazy Snowboard behind them, they’ve shown their light-hearted approach to gaming is a great fit for mobile devices and Team Awesome just might be their best yet.
Team Awesome is an auto-runner at heart, but don’t get it confused with an endless runner, because that it is not. See, here you’ll only need a single touch of the screen to jump and if you hold it, your superhero will take flight – the running is taken care of for you. Hold up – did I say “superhero?” Why yes, I did indeed. Team Awesome features four everyday ordinary people who are transformed into superheroes when a meteor cashes into Earth. This gives way into 40 episodes of challenging platforming action that’ll have you collecting stars that are mysteriously floating in the air, putting out grannies’ houses that are on fire and even battling it out with a guy that curiously looks like Arnold Schwarzenegger and is flying around in a heavily armed flying toilet – remember that laughing out loud on the train ride bit I mentioned earlier? 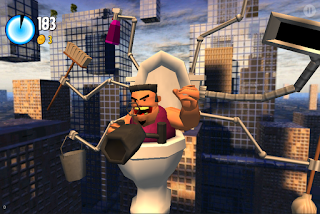 What makes Team Awesome different than the rest of the auto-runners out there, is that your superheroes here are just as they should be: invincible. It doesn’t matter how many evil robots, cats, mimes and fire trucks you run into, none of them will hurt you. Even if you run into the one and only dog found in the game – not a single scratch. What does hurt you though, is if you run out of meteor power. Blue meteor shards are scattered throughout each level and they prolong your running time to complete each levels’ multiple challenges. Hit a red shard and watch a sizeable chunk of that power meter instantly dissipate. This creates a sense of urgency in the levels when you’re so close to completing a challenge, yet find yourself running out of power whilst having to dodge red shards that will surly bring forth your defeat.
Like most games in the genre, Team Awesome is jam-packed with unlockable content. Upgradable powers, additional characters and episodes all await you hard earned in-game gold coins. If there’s a complaint to be had here though, it’s that I don’t like having to use my coins to purchase each new episode. You collect a lot of them throughout normal play, but the ever increasing amounts needed to buy new levels makes saving up for upgrades and new characters (which are really expensive) quite the task. But there is a levelling system that wins you coins for each level that you gain, which in turn also gains you another comical voiceover from the Duke Nukem guy that’s guaranteed to use the word “awesome” multiple times. You’re also treated for daily play with an extra sack of gold too, which in turn alleviates the issue a good bit, but nonetheless it’s still there. 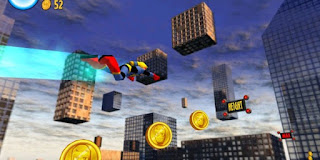 On a brighter note though, the colourful graphics found here are indeed bright and vivacious. Much like what’s found in Diversion, the Edis Brothers take us back to the polygon era of gaming with Team Awesome, which brings along a fantastic retro appeal to the game. Adding the booming voice of Jon St. John only furthers this appeal too. I’m not too sure that this “retro” appeal was intentional, but it’s one that I openly welcome and keeps me coming back for more each day.
Like the Edis Brohters’ earlier title Diversion, Team Awesome is also just that: a great “diversion” to have a bit of fun and a good laugh when a few spare minutes come along your way each day; it’s a perfect fit for the lighter side of what mobile gaming has to offer. Top off the challenging platforming action with a hysterical narration from the Duke Nukem guy and Team Awesome becomes, well, kind of awesome.
– Chris I

The Weekend Discussion: Entertainment Vs. Experience