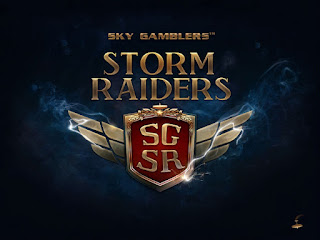 And some folks say that “iOS can’t compete with home consoles.”
Well, if that’s true, then somebody forgot to send Atypical Games the memo. Sky Gamblers: Storm Raiders lifts off on iOS and brings a stunningly beautiful and fully packaged World War II flight title along for the ride. Not only does it come slam packed with modes (online and offline), but it also comes equipped with a multitude of control options that allow you to choose if you want more of a hardcore simulation experience or a “just having fun” arcade styled approach – the choice is yours to make. It’s time to buckle up; this ride is going to get rough.
Set back in the World War II era, Storm Raiders puts you right into the cockpit of some of the most famed aircraft of the era: P40 Warhawk, F6F Hellcat, Spitfire, P38 Lightning and even the IL-2 Sturmovik makes an appearance here. Each one has multiple paint schematics that can be unlocked and most importantly, each plane has its own attributes (armour, handling, weapons, etc.), which makes them pilot differently from one another, which is a big deal when it comes to taking the dogfighting action online, but we’ll get to that last bit later in the review.
The main campaign is broken down into two separate scenarios: Asia-Pacific War and Battle of Britain. Each scenario is broken down into 6 lengthy missions that can find you hard up amidst the frenzied action that took place during the surprise attack at Pearl Harbor, or escorting an English fleet of naval vessels throughout German U-boat infested waters. The Battle of Midway, Luftwaffe over Britain and several others notorious battles are also featured here and each of them straps you into the appropriate aircraft for that particular scenario. History tells us that each of these battles were extremely intense and Atypical Games made sure that their recreation of them held true to just that, yet remains fun for a videogame experience. 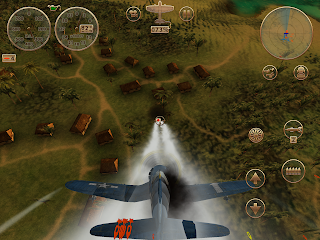 There’s a vast array of control options to play with here, but they boil down into two variations for the most part: gyroscope controlled simulation and virtual joystick casual (arcade). Using the gyro controls takes some getting used to, but once you come to grips with it, it works quite well. You’ll have full range of control over your aircraft and once mastered it will give you an edge over anyone who gets in your way.

If you don’t want to go that route there’s the familiar onscreen virtual joystick/buttons setup that works just fine here too. There’s quite a few options that mix and match things up a bit, as well as Auto Stabilization and Auto Aim if you so desire to use them (I don’t recommend using either of these, especially with casual controls). The only gripe I have with the controls is that every so often it felt like the virtual joystick was a little unresponsive. I would have also liked to have had the ability to adjust the sensitivity of the joystick up a good bit higher too, but that’s only nit-picking. All in all, you’re sure to find a control method that suites you best and the game’s tutorials does a great job of making this as easy as possible.

Before I jump into the additional modes and extras, I’ve got to talk about the absolutely stunning visuals in Storm Raiders. “Wow!” Yes, “wow” unexpectedly erupted from my mouth aloud as I fired up the first campaign mission and watched the Japanese fleet of naval ships approach Pearl Harbor. The glossy look of the Retina Display (reviewed with a 4thGeneration iPad) amplifies the beautiful water of the bay and when taking flight for the first time the sky and terrain is simply stunning to behold. Lighting and weather effects are top-notch here, as well as the airplanes’ modelling and physics. It’s only when you get close to the ground that you’ll see that the ground and buildings aren’t quite as detailed as the rest, but that’s typical for flight titles. It’s not all looks though, because Storm Raiders’ sound is great too. Engines roar and bullets crack just as they should, and the soundtrack makes you feel like Tom Cruise is going to walk up in a brown leather jacket and aviator glasses at any given time (read: perfect). 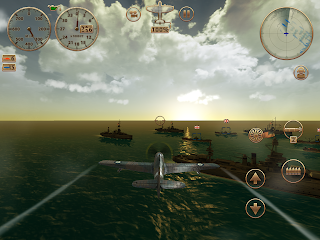 Wrapping things up, there’s a ton of modes to play outside of the campaign: Survival, Dogfight Missions, Capture the Flag, Defend the Base, Team Deathmatch, Free for All, Free Flight and Last Man Standing. Not only can these be played offline against bots for additional points to acquire new aircraft and paint schemes, but they can be taken online (Local Wi-Fi, Online and Game Center) for the ultimate challenge as well. The online servers are filled with pilots from around the world and the awesome dogfighting action was completely free of lag in my time spent there for this review. With Storm Raiders being an iOS exclusive, it comes with the benefits of AirPlay to use an Apple TV to stream the game onto a larger display, as well as iCloud and full Game Center support.
Sky Gamblers: Storm Raiders brings a true home console experience to iOS in the form of an action-packed World War II era flight title. With its stunning visuals and multitude of control options, the dogfighting action here is as good as ever, whether it’s in the offline or online worlds. Even with having “gamble” in its name, there’s nothing to gamble for here – it’s worth every penny of $59.99 and it only cost $4.99. If you enjoy flight games, there’s absolutely no reason to miss out on Sky Gamblers: Storm Raiders!