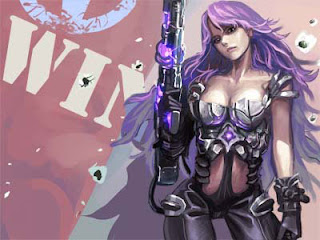 Castle Conqueror Heroes was one of Castle Entertainment’s better titles. A shameless and cheap knock-off off Fire Emblem, it was somewhat compelling by virtue that the Fire Emblem formula was so compelling in the first place.

Since quality by association seems to be a win for Circle, it’s back with a sequel. Castle Conqueror Heroes 2 is still a barely playable and quite shameless copy of the core of the Fire Emblem franchise, and it still fails to understand why people play these games in the first place, but it is still one of Circle’s better titles.

Given this is in theory a strategy RPG, the first point of call would be to discuss the story, right? Well, I really can’t, because it is so poorly written and makes so little sense that it confused me to the point where I just skipped every story sequence. There’s something about it taking place a few years after the last game, but that’s about all. Dialogue is painfully bad and text is filled with grammatical errors. Given the plot is a critical drawcard for RPGs, the lack of anything decent to read in Castle Conqueror immediately relegates this game to B-grade at best. 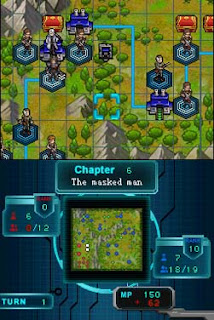 The presentation of the game is also woeful. Sprites are ugly and poorly animated, and so you’ll never develop a connection with any of the characters. The music is weak, and the backgrounds are completely non-interactive. Units wander over forests and steep cliffs like they were grassy parks. So that ruins the strategy part of the game – if there’s no opportunity to take advantage of the environments, then the game simply becomes a matter of hitting the enemy with everything you’ve got and hoping for the best.

That process becomes incredibly tedious too thanks to Circle Entertainment’s patented unfair difficulty spikes. I can only assume it’s patented because I don’t see anyone else doing it… it could just be because it’s an example of stupid game design too. By the third level you’ll be hit by crushing walls of difficulty that make progression almost impossible the first time you play a level. Both in terms of numbers, and levels, you’re simply going to be outnumbered and outgunned at first. It does pad out the game’s length to something respectable by DSiWare standards, but it’s an obnoxious way to drain people’s times.

Despite all that the game is at least playable, which is a nice change from Circle’s usual fare. There’s something very compelling about this basic formula, and despite Circle’s best efforts, they haven’t completely ruined it here. It’s by no means a game that I would recommend people pay good money for, but if you’re absolutely desperate, well, there’s not much else on DSiWare these days.

– Matt S
Find me on Twitter: @DigitallyDownld
And I’m also on MiiVerse: WaltzIT