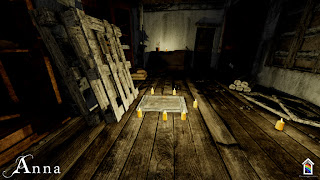 Anna is a first-person horror game. Now, if you have been paying attention to the video game scene within the last five years, that description instantly makes you think of Amnesia: The Dark Descent. And this is the part where I tell you stop it; Anna is most certainly NOT a horror game in the ilk of Amnesia, both mechanically and in terms of quality. While it is obvious that the first outing from an independent developer (Anna creator Dreampainters) will almost always not be as polished as the fourth outing of an independent-edging-on-middle-tier developer (Amnesia creators Frictional Games), Anna does not have the excuse to be as bad and lazy as it is.

The set-up for the story of Anna is not terrible or sorely lacking in quality. Mysterious Man #456, the protagonist, has decided to revisit an abandoned sawmill in an attempt to recollect memories of his long lost love, the titular Anna. But right after the opening self-narrated monologue of text is completed is where the game starts to go downhill. 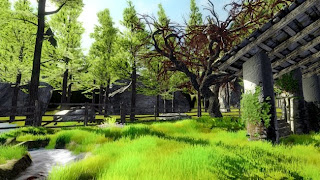 Mechanically, Anna has all of the trappings of an adventure game. Littered throughout the environments are puzzles and objects, those puzzles of which will need to be completed with the following objects or combinations of those objects if the player wants to proceed. However, the game also brings along another, extremely frustrating trapping of the adventure game genre; moon logic puzzles. The first puzzle of Anna seems simple enough; the door to the sawmill is locked and the player is charged with finding a way to unlock that door. Real-world logic would dictate that there must be some key to the door, which could be hidden anywhere in the environment. A smart adventure game designer would take this logic and work a way so that the player would use the several objects in the environment in clever but plausible ways to gain access to that key and thus the inner workings of the sawmill.

In Anna, the door puzzle does not involve a key in any way. Rather than being logical, the game forces the player to construct a mirror in notches atop that door, place a pinecone above that mirror, and set that pinecone on fire before players can even enter the sawmill. And things do not get better inside the sawmill itself; more than half of the games puzzles will throw new players for a loop, that of which can only be combated with the use of a guide. It is almost atrocious how obtuse these puzzles are even in comparison to other adventure/puzzle games. 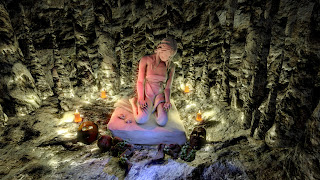 Anna, also being a horror game, does try to scare the player. Sadly, a majority of the scares are ineffective to even to those who have had little experience with horror media. And the scares that are really effective (I guarantee there is a handful) come with a catch twenty-two; the scares have no consequences attached to them. I do not mean in the traditional, “It is a video game, of course there are no consequences,” sense; the scares have literally no effect on anything despite the games description saying otherwise. For aware or returning players, this can be a real hamper on the experience.

Anna is also a cheap game both in content and graphics. While it is understandable that Anna has fairly low-polygon models as it is a debut title from an independent developer, there is no excuse for the extreme lack of content within the game. From what I can recall, there are four areas in the game, all of which are reused heavily to the point that it seems like the puzzles are used to pad-out the playing time. While these environments do change, they do not add up to anything which could resemble entirely different environments.
Overall, Anna is a weak horror game and a very week adventure game. The scares are not threatening and the gameplay consists of using objects in illogical ways. Add on top of this that Anna is not a pretty game or one filled with content and the entire package is almost deplorable.