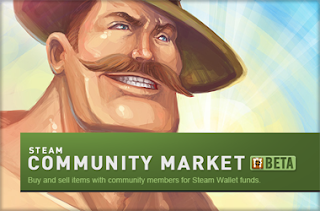 Valve Software’s Steam digital distribution system has seen a variety of interesting changes in 2012. From selling software to Steam Greenlight to Big Picture Mode, it is hard to say that Steam has remained the same despite the unchanged storefront. The reaction to all of those additions has been a mixed bag, with some against them while others are in love with them. And I can’t see Steam’s latest addition breaking from that undecided area; the Steam Community Marketplace.

Launched earlier this week, the Steam Community Market allows for Steam users to sell certain Team Fortress 2 items for whatever price they desire. Users can then browse those items and buy whatever they want, with 90 percent of the transaction transferring into the sellers Steam account as Steam Wallet funds (the other 10 percent goes to Valve). As Team Fortress 2 is a free-to-play game, this means that it is possible to buy games on Steam without spending a single cent on the service.

Now, as I see it, this is both great and potentially terrible. While I love the thought of not having to spend a single cent to buy a game, especially doing so while playing a great game (Team Fortress 2), this definitely opens a market to Gold-Farmer-esque tactics of grinding for those certain Team Fortress 2 items, acquiring enough in Steam Wallet funds to “Gift” an individual a game, and receiving cash as “Complimentary Thanks”.

However, I would assume that is the reason for the “Beta” tag; the only game that supports the Steam Community Market is Team Fortress 2 with no signs of other games joining in on the fray just yet. The Beta tag also allows for Valve to completely pull the remove the system if it gets out of hand without giving angered individuals any ground to stand on. Regardless, the Steam Community Market is ongoing as of this writing and it is definitely a sweet deal to regular Team Fortress 2 players.

The weekly discussion: The console of the year