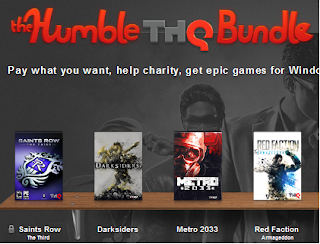 Well, I did not expect to see this in my lifetime.

For those living under the rock, THQ, full name ‘Toy Headquarters’, is a North American developer and publisher of video games. While THQs resume mostly consists of publishing tie-in games, there are a notable games among the hoards, including the Saints Row, Red Faction, and Warhammer 40K game series.

For those who have not been paying attention to the company as of late, here is the big news; THQ is coming ever-closer to closing its doors for good. While closing offices and losing a chief financial officer are not concrete indicators of imminent collapse, they are not compliments in the face of a massive stock price crash. THQ is not in a secure position right now and it will take a lot of hard work along with careful decisions relating to its biggest products for the company to overcome its current financial woes. And then there is the Humble THQ Bundle.

As is the standard for Humble Bundle game packages, paying anything more than a small minimum (in this case, $1 US) nabs you several games. As the bundle is THQ-themed, the games are Darksiders, Metro 2033, Red Faction: Armageddon, Company of Heroes, Company of Heroes: Opposing Fronts, and Company of Heroes: Tales of Valor. As an added bonus for those that pay over the average bundle price (currently ~$5.25 US), they get the recent Saints Row The Third, not including the enormous amount of DLC. Note that if you do actually spring for this bundle, you do not get any direct downloads but rather Steam keys for the games.

While this can be viewed as a slightly reckless decision on THQs part financially as it looks very much like THQ is devaluing its properties in a time of financial need, this move could also be viewed as a great public relations stunt. THQ has definitely drawn less hate onto itself than other game companies, with the two competitors for the most disliked games company currently being Activision and Electronic Arts. If THQ can acquire some good will from this promotion, I do not doubt seeing its consumer relationships enjoying a pleasant increase in satisfaction.