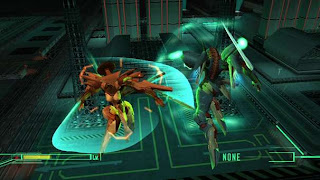 I now know that the Zone of the Enders games have held up remarkably well over the years, but the HD remake of these games does prove something else: HD remakes are a problem.

I haven’t played an Enders game since they were new back on the PlayStation 2. I loved them back then (after all… flying robots), and there was an immediate nostalgic thrill to popping the game into the console and reacquainting myself with the machines. I have become better at games since those days – I was challenged reasonably hard by the Enders games when I first played them, but I found them relatively straightforward this time.

That’s not to say the games are not engaging and interesting. There’s more than enough depth to these games that they get to be a rare breed of fast-action game where button mashing simply will not work. It amazes me that the control system, which is near perfect, and lovely pacing balance between action and down-time has not been ‘borrowed’ by more games since. I can only guess that is why Enders gets to be a classic game – it’s a formula that is apparently difficult to recreate. 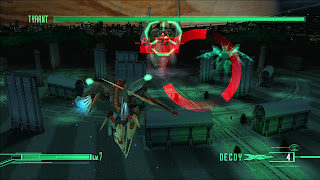 Given that these games come from the mind of a certain Hideo Kojima players should be going in expecting a rather elaborate plot and some very lengthy and often forced, but very effective, dialogue. It does not quite go to the elaborate lengths of, say, Metal Gear Solid Snake Eater, but it’s still a game heavy enough on the dialogue and story that it could be almost be an RPG. It’s amazing that the quality of the voice acting holds up even today. It’s like watching an anime (and indeed, Zone of the Enders became an anime), and that’s clear proof of just how advanced these games were for their time.

So I can’t emphasise enough that Zone of the Enders two highly compelling titles and anyone with fond memories of either game will get a real thrill breaking open the package and reliving two of the finest titles from the last generation. It’s just as well that the games have that positive vibe of nostalgia, too, because they sure as heck look nostalgic. 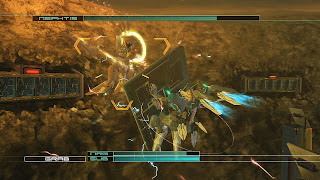 As far as I can tell, the only benefit from the “HD” treatment with both games is the fact that the lines and dialogue looks a little crisper on the screen. The characters have incredibly low polygon counts by modern standards, which is not so much a problem in gameplay because robots get away with being blocky, but in cut scenes and the like it’s definitely a problem. The aesthetics suffer from a lack of modernisation too. The colours used are a little basic, environments are a little empty, lighting effects are primitive and backgrounds look positively amateur.

When the action heats up none of this is especially noticeable, but there are moments when I sat back and thought to myself “this could have been released as a retro classics download without the ‘HD optimisation’ for a quarter of the price on XBLA/ PSN, and the experience would not be materially different.” 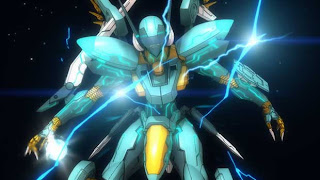 It’s a problem I have with almost every HD collection that’s been released this generation. It’s a fine idea to update the real classics from the last generation for both retro fans and new gamers. At the same time, the new generation of consoles has brought with it far more than 1080p resolution. Developers are now able to fill their games with interesting environments, take advantage of advanced lighting effects and give the AI a real boost.

Simply upscaling PlayStation 2 games unfortunately does not modernise them, so the very concept of the HD collection remains a flawed one. No doubt we will see more of this with the Wii-to-Wii U games, too.

When that starts to happen I’ll say the same thing I’m saying about Zone of the Enders – these games are essential purchases and are “classics” for a really good reason. It’s a shame the port could not be better.

Binding of Isaac to be reborn on consoles

The Humble THQ Bundle; Yes, it is real