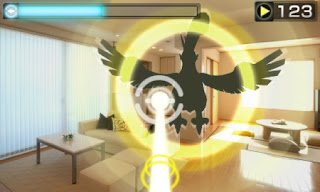 Talk about a weird franchise. The “main” Pokemon games – those games where you battle and capture hundreds of monsters and then trade and battle them with your friends – is an amazingly addictive and consistently great series.

The “sub” Pokemon games are almost universally terrible. Pokemon Snap way back on the N64, Pokemon Mystery Dungeon and Super Pokemon Rumble are reasonable, but the likes of Pokemon Dash and the PokePark are up there with the most disappointing games on their respective consoles. So I was not exactly expecting the world to be set on fire when a cheap little downloadable game, Pokemon Dream Radar, popped up on the 3DS eShop.

But that preparation did not prepare me for just how bad this game is. It’s by far the worst Pokemon-themed game ever released, and given how closely it ties in to Pokemon Black and White 2 this game’s sole achievement is to dampen my enthusiasm for the excellent main game by forcing me to play this download. 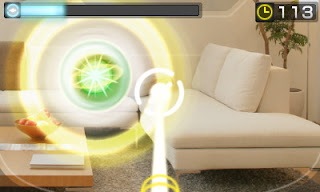 Dream Radar is so simple that there isn’t really a game in there at all. There are clouds that are floating around a background that is fed through the 3DS’ camera. In other words this is an “AR” game, where players are moving around a real space. There’s no interactivity involved naturally – AR is too primitive for that. It’s just random pink and black clouds stuck around your living room like a really bad UFO faked photo.

The aim of the game is to shoot those clouds. Usually those clouds disappear into a group of orbs. Shooting those increases your in-game “currency” for upgrading the laser beam gun. Not that those orbs move around or anything – oh no, nothing like that. There’s no skill involved, just aim the laser at the orbs and fire away.

Every so often a cloud will be hiding a glowing, moving orb, though. Very rarely shooting a cloud will reveal a legendary pokemon rather than a glowing orb. In both cases the resulting mini game plays out the same way. You’ll need to move around with and keep shooting. Wear them down enough and you’ll “capture” them. Sometimes these glowing orbs are pokemon, sometimes they’re items. It would have been too much work to have anything but the most special legendary pokemon actually on the screen after all. 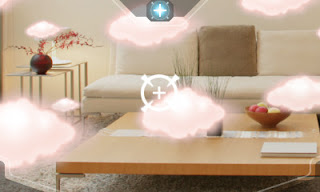 Except it’s not too much work. Tiny little indie outfit, Nnooo, has a game coming called Spirit Hunters which is going to be released as DSiWare (and therefore developed for a far weaker system than the 3DS). It does the same thing as Dream Radar, except that you’re actually battling monsters. And on top of that, Nnooo’s games has special abilities and other RPG elements. There is nothing more than a basic upgrade system for a few stats you couldn’t care less about here.

Yes you can transfer the pokemon caught in Dream Radar to your Pokemon Black 2 game, some of those pokemon are unique to Dream Radar, and some have special abilities they can only earn though the app. But that just makes Dream Radar an especially nasty bit of DLC that is utterly useless to anyone who doesn’t have Pokemon Black/ White 2, and for people that do, it’s gouging them an extra couple of dollars for a bit of download software that could easily have been included in the game itself and even then would be the least entertaining part of the game.

And people complain about Capcom’s DLC policies. Game Freak’s managed to jump to the very top of my naughty list for this bit of unabashed exploitation.