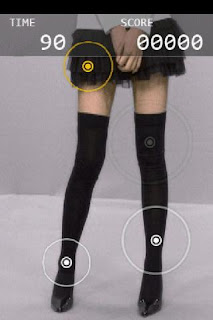 Usually where a lady’s legs are a major feature in a game, I’m all over it (please don’t show my wife this review, folks, she’ll kill me). Dead or Alive 5, for instance.

But then there’s Pinky Spots Leg Massage. A game that has managed to creep me out more effectively than anything else I’ve ever played. This game seems to have been removed from the PlayStation Network – I’m assuming because it’s crashed my Vita a few times already, but I’m hoping because Sony realised what exactly the game is about and decided to execute a “good taste” clause in its developer agreement. But in the event that it does come back, here’s precisely why it’s a game to avoid:

The basic idea of the game is to rub certain parts of a girl’s leg to give her a massage, make her squirm a little, moan and groan a little more, and get massive scores. As an added bonus, the girl’s legs that you’ll be “massaging” are those of a real girl – the developers have photographed and animated a real person, rather than build a digital model.

Why would you want to get a big score? Great question! I ended up asking myself that every time I played the game. The higher the score at the end of 90 seconds of vigorous rubbing, the better the reward when the time runs out – ie, the higher the score at the end of a game, the more revealing the photo ‘prize’ will be. But beware, if you miss rubbing the girl’s leg in a certain spot, then she’ll get upset and you’ll lose valuable time to make more points, so you’ll need to play well to get those best pictures. Of course, the photos are so low-resolution that it’s a kinda pointless reward, but hey, perhaps some people out there haven’t discovered Google image search yet.

I really wish I was making this stuff up, but, of course, it gets better the more you delve into the game. And by ‘better’ I do mean ‘more frightening’. For a start none of the pictures in the game show the girl from the waist up. While it’s a real girl posing both in-game and in the ‘prize’ pictures, but you’ll never see her face, just her legs. This is disturbingly creepy and offensively objectifying. As though the developers realised this and decided to also ‘educate’ players to justify the game, between the stages the game highlights a couple of specific massage pressure points with a brief (in broken English) description of the various bodily functions that a massage on that pressure point will help.

Yep. That’ll make you feel better about being creepy.

I’m a guy with a pretty high tolerance threshold for material that other people find offensively creepy. I wasn’t fazed by Mugen Souls, the Atelier series and Ar tonelico Qoga. That this game repulsed me is proof that Pinky Spots is a game best avoided, if it should somehow ever sneak back on to the PlayStation Network.

And, I must say shame on Sony for ever letting this thing happen. When you’ve got two dozen games at best available on a fledgling download platform, why the heck would you want something like this on there? It was such a visible release because there are so few games on there right now, and just sitting there it gave the PlayStation Mobile platform a heck of a sleazy look to it. I really, truly hope this game was removed from Mobile not because it is filled with “crash your Vita” bugs, but because Sony realised it would freak out anyone with a shred of decency.