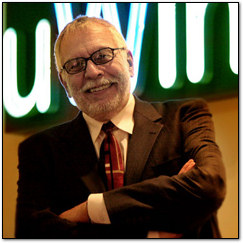 It is becoming increasingly apparent to me that the games industry is utterly intolerant of failure. And this is a far bigger problem than many realise.

Recently, the ‘father of videogames,’ Nolan Bushnell, came out on Twitter and said that he “doesn’t really understand” the Wii U. A statement like that is fairly standard for Bushnell – he has been highly critical of a lot with regards to the modern games industry.

Predictably there was a large snort of derision from a large segment of the games industry at that comment. Without naming names, here’s a very small sample of comments taken from one website (verbatim, so there’s a healthy dose of [sic]s in the following);

“This Man made so many garbage systems. I have an Atari 2600 but Never even knew about any other Atari console until 1998 when I got the Internet.”

“Why does his opinion hold any weight? He’s just an old man who hasn’t had any success in the video game business since President Reagan was in office.”

“Oh gee… words of wisdom from the man directly responsible for the video game crash of 1983.”

“Says the person from the company who released the 7800 and Jaguar; known as some of the most failed consoles of all time!”

I’m not going to comment on whether Bushnell is right in his assessment or not of the Wii U, or whether it’s going to be a successful console – that discussion is for another day. The reason I am highlighting these comments (and remember they are just a very small sample of the overall outcry) is that, for me, there is a problem here: people seem to be implying that Bushnell is not worth listening to because he’s had some failures in his career.

He’s also not the only example of this. Mention Peter Molyneux online and you’re likely to be reminded (often and vigorously) about how he fails to meet the promises he makes with his games, and again, such comments come with the implication that he’s not developer whose opinion is worth listening to as a result.

On two levels attitudes such as these disappoint me. It disappoints me because it in turn implies there’s a negative mindset amongst the gaming community that a developer/ inventor is only relevant as long as they’re successful. Never mind that Bushnell essentially invented home console gaming, he’s not worth listening to because he also greenlighted some dud projects. Never mind that the mind of Molyneux gave us hit after hit in the Bullfrog era, Fable underdelivered and now he’s doing ‘crazy’ experimental things that people don’t seem to understand such as the iPhone game, Curiosity. Because of those later arguably failed games he now knows ‘nothing’ about game development.

A deeper concern I have with these attitudes is not so easily resolved, because it’s a collective attitude towards failure in the games industry, not an individual one. Because there is such a vocal group of gamers, media outlets and industry spokespeople (remember the ‘your games suck’ comment from Phil Fish regarding the Japanese industry?’) that is intolerant of failure, the entire games industry is becoming intolerant of failure.

I’ve written in the past about how being risk-adverse is going to damage the ability for the games industry to be creative, and the fear of making mistakes is going to play a significant role in building up that risk-adverse mindset. Publishers are greenlighting proven, safe game ideas because there’s a fear of a commercial dud, yes, but there’s also the reputational damage to consider – if you mess with a fan favourite franchise too much acquiring customers for the next sequel will be all the more difficult. We saw this with Halo 4 more than any other game in recent memory – as good as it is that game, from start to finish, Halo 4 was clearly frightened to do anything that might be perceived as a ‘mistake’.

When Metacritic scores can influence whether a developer can get a job, and when the games community is so willing to dismiss those that do make mistakes out of mind, the games industry itself will begin to stagnate under this fear of failure. Developers will stop bringing new innovation to their bosses if the only way they’ll benefit from doing so is if it’s an idea that is a guaranteed success. Given there’s no guaranteed successes in life, the well of new ideas will dry up rapidly.

Meanwhile experienced and more experimental developers such as Peter Molyneux will become less actively engaged with the industry the more they are derided out of the industry. Ignoring Molyneux’s detractors, he provides the industry a very valuable public service in being so vocal; people learn from his mistakes. The only way that an industry can develop is if we have prominent, experienced, and proven experts on the subject presenting alternative ideas on how to do things, and actively looking to break down the norms. This is a creative industry, and so we as an audience for that industry should be engaging with the words of a person like Molyneux, not dismissing him.

The reality is that failure is a good thing, as it is by far the quickest way to learn and develop new ideas. I was recently speaking to the head of technology at a major global bank, and he was walking me through how the bank was working hard to shed the fear that people have to make mistakes in their work. Let me just re-state that for emphasis: an executive at one of the largest banks in the world, working in the most highly regulated industry in the world, is actively working to build a culture where mistakes are tolerated, if not encouraged.

Why would an organisation allow this to happen? Because it encourages innovative thought, I was told. If staff are no longer worried that if they accidentally blow up something they’ll be shown the door, they’re going to be that much more willing to come up with some ideas on how things can be improved, and apparently there has already been great results from this new policy.

Which ties neatly back to the question of why the games industry is so intolerant of failure when even financial services have clued into the value of mistakes. Bushnell is not “that guy that nearly ruined home consoles.” He is an innovator that has made mistakes, but they’re mistakes that we can learn from, and when he speaks out on an issue, it’s because his experience (and failures) have told him that it’s not a good idea.

Molyneux has made promises in his games, and not delivered on them. Rather than criticise him for it, we as the gaming community should be encouraging him for trying to push the envelope.

It’s in the interest of the games industry to encourage, rather than disparage, experimentation. The very nature of experimentation means that sometimes things will go wrong. There isn’t a single great inventor or thought leader in history who has not made mistakes. And the people who are willing to go out there and make mistakes are the ones that we should be listening to, because unlike those that are risk adverse, the innovators are the ones that have the vision to make a difference.