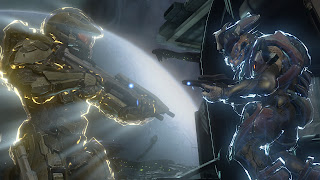 With Halo 4, the FPS genre has hit its peak. In other words; as good as this is, it’s all downhill from here.

Before we get to Halo 4 itself, I’d actually like to kick off this review by sharing an image; it’s called the Gartner Hype Cycle (see below). While it is a graph typically applied to business technology (Gartner being a business technology analyst firm), I think it’s entirely appropriate to explain what has happened to the modern FPS genre, and what will likely come next: 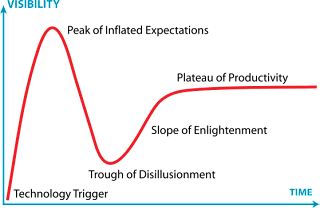 The FPS genre is currently at what the Hype Cycle calls the “Peak of Inflated Expectations.” I say this because the budgets for these games are getting bigger and bigger, while at the same time the formula of the genre is becoming more and more homogenised – developers have latched on to something that works, and are running with it. 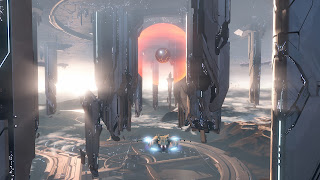 There’s nothing necessarily wrong with that since the basic formula for the FPS is so popular for a good reason, and indeed it makes sense from a business perspective because these games sell reliably well on the market. But at some point consumers are going to realise that they’re playing the same game over and over again. That happens right after the genre has hit its peak and can’t offer any more than what it’s currently offering. The genre then slides into the “Trough of Disillusionment,” and that’s when it becomes a hard time for developers and publishers. Games that were reliable sellers on the market cease to be and customers start looking for the next big thing.

We saw this slide happen with the JRPG genre not long ago, in fact. People claim that genre is “dead,” – it isn’t really, it has just fallen out of the mass-market mindset because it slid into the Hype Cycle’s Trough. What happened to the JRPG genre is also going to happen to the modern FPS. The good news is that when the genre eventually matures out of that Trough, it arrived in a period of “Enlightenment,” where those games that are produced are innovative or intelligent reworkings of the basic formula – that is what is happening with the JRPG genre now, for instance. 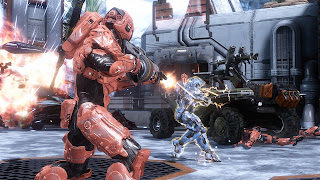 What does all this have to do with Halo 4? I have a strong suspicion that Halo 4 is the game that will be at the tip of the Peak of Inflated Expectations for the FPS genre. This is both a compliment of the highest order, and a resounding criticism of the game.

Because I like to start with the positive with my reviews; there is not a moment in Halo 4 that is a missed opportunity to drown players in wonder and amazement. Around every corner is a more impressive vista than the last. Alien landscapes look incredible from a distance, but the eye to detail up close is even more impressive. The plot is standard pulp science fiction, but it is told in such an earnest fashion with such talented voice actors that it’s more than enough to sustain you from start to finish. And, for a genre that more and more feels like the single-player game is merely thrown in as a tutorial for multiplayer deathmatches, the epic nature of this game’s plot is a welcome sight in Halo, and proof that the franchises’ new developers have a firm grasp on giving people what they want.

Enemy AI is possibly the biggest improvement that Halo 4 brings to the table. It’s not that the AI itself is necessarily smart – winning through the game is, as always for the genre, a process of learning and then exploiting patterns. What is changed is how aggressive those enemy patterns are and how few mistakes the enemies make this time around. I was able to exploit Halo 4 far less than previous games, and that’s a substantial boost to the series. Players can go into the more difficult settings expecting to have to work to earn victory, though less-experienced players can keep the difficulty setting low and blast through the game with reasonable ease. In other words Halo 4 has a little something for everyone. 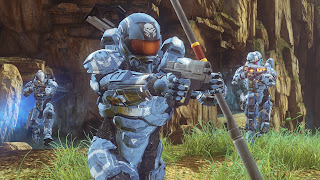 And then there’s the multiplayer. Halo 4’s competitive and cooperative games are so finely tuned that the servers are surely going to be populated well and truly into the distant future. I’ve not played a game that gets the weapon, map and levelling balance so right as in Halo 4. Each gun has exactly the right amount of power for the feedback that it gives you. As a result, taking a pistol into a gun fight is enough in itself to make your hands sweat.

Similarly, coming up against someone with a much higher level than you is going to end badly nine times out of ten, but it’s the kind of failure that will encourage people to get up for more, because progress occurs at a fast enough pace to leave a very big carrot dangling in a player’s face. Multiplayer levels are so expertly designed that mastering them and learning the optimal strategic points is in itself a game. And just to add even more value to a package that is already overflowing with it, there’s a nice level-creator mode for some quality user-generated content. 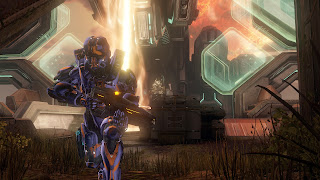 The FPS genre has always shone brightest as a competitive e-sport and Halo 4 will stand as the pinnacle of the genre. I see the community forming around it as, generally, a more mature one than its great rival, Call of Duty. There’s a class and intelligence about Halo’s maps and environments that I have a gut feeling will be less attractive to the kind of chain-swearing teenagers that just want to shoot stuff in the head. For anyone who has played a Call of Duty game online, this is a good thing. Obviously the developers will need to keep patching and updating the game to prevent exploits and hacks but the great thing about buying into a game of Halo’s profile is that you just know the policing of the servers and quick patching will be an ongoing affair, where the wait for fair play with lesser FPS games is longer.

There is very little to criticise about the actual game of Halo 4 in other words. The game controls like a dream, looks amazing and has the expected brilliant multiplayer options. The great problem with Halo 4 that in many ways has ruined the game for me is more philosophical in nature; for all the game’s budget, it 343 Games have produced something so safe it’s cringe-worthy. 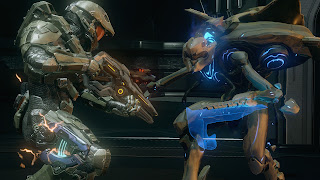 Playing this game you can just tell that the new development team were outright frightened to upset a single Halo fan (and given we live in the era where gamer entitlement can ruin a company via Metacritic, that’s perhaps a justifiable fear). For Halo fans environments, weapons and enemies are safely familiar. The return of Master Chief is likewise understandable, but it’s such a cynical play to appease Bungie fans with the promise that the new team isn’t going to rock the boat that it is also a little depressing to see him return. If this is meant to be 343 Industries’ baby, why do I feel like the team is just the babysitter?

The game’s structure plays out very nice and neat for FPS veterans, too. Chief runs down a corridor and winds up in an open environment or room filled with plenty of enemies and plenty of areas to hide behind to recover health. He’ll work through that environment, shooting everything in his path, before wandering down the next corridor. It’s the exact same game that we’ve played a thousand times before, just with a different skin this time. 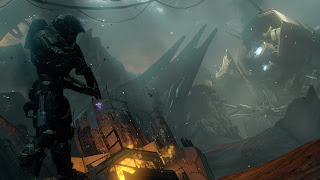 At its core Halo 4, like the rest of the FPS genre, is no more complex than that duck-shooting game you play at fairgrounds and carnivals. Sure it requires more skill (the “ducks” are not moving in a nice neat left-to-right pattern), but for the costs that went into making the game, I generally expect (and are usually disappointed) that developers try and push the boundaries a bit further than what they do. I don’t want a carnival game when I buy a FPS. I want a full interactive experience. Halo 4 never manages to break away from its brothers and sisters in this regard, sadly.

We’ve just seen with Assassin’s Creed III that a AAA-game with a mega budget can take risks and still hit the kind of critical and commercial expectations of a AAA-game. That Halo 4 fails to make any real impact on me beyond “this is a fun, big budget game” is not a reflection on the game’s mechanics themselves – which are as good as I’ve ever seen in a shooter. No, Halo 4’s failing is that it was scared to fail. This is a game that has been meekly cobbled together to check off the “how to make a big-budget FPS” game, and it does lack an identity of its own as a result. 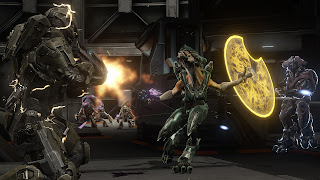 Given that there are more Halo games to come I can only hope that the inevitable success of this game will convince the developers to be a little more confident in themselves with the next game and break away from both the shadow of Bungie.

It’s going to need to, because consumers will be getting sick of the saturation of highly-competent-but-generic shooters by the time Halo 5 rolls around. And to Halo 4’s credit it does issue a very big challenge to the rest of the developers out there making FPS games – if they don’t find ways to be genuinely innovative moving forwards, then their own games are going to be nothing more than pale carbon copies of something that is, mechanically, perfect.