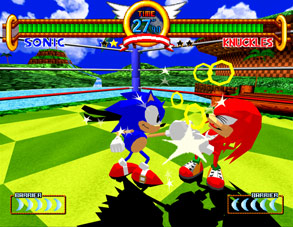 Sega appears to be pulling out all the stops when it comes to digital re-releases. The last few months have seen the release of NiGHTS Into Dreams, Jet Set Radio, and Sonic Adventure 2. Just the other day, we heard the news that ToeJam and Earl would be returning as well.

Rather than port more console games, the company has seen fit to start pulling from the arcade. These releases are decidedly more difficult to track down, which will perhaps justify the downloadable transition for some.

The roster announced thus far is as follows: Virtua Fighter 2, Fighting Vipers, Virtual On, Virtua Strikers, and Sonic the Fighters.

Sonic the Fighters is particularly noteworthy due to the fact that it features several enhancements. Chief among them is a new online mode that allows you to square off against your fellow Xbox-ers and PlayStation-ites. The roster is also slated to expand from the original eight characters, now sporting at least 11 with additions such as Metal Sonic, Honey the cat, and Dr. Eggman.

Similarly to the Sega Heritage Collection, the games will be individually sold. Though Australian, North American, and European pricing have yet to be confirmed, we do know that each title will cost 800 Microsoft Points in Japan. Virtua Fighter 2, Fighting Vipers, and Sonic the Fighters will hit native stores later this year with the rest to follow at some point in 2013.

Check out the Japanese announcement trailer below: