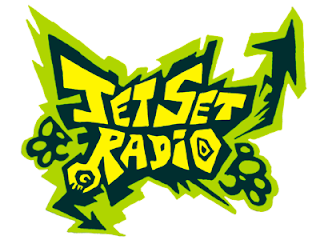 Many gamers today seem eager to throw around the phrase “gameplay over graphics”. While it seems to be a sound theory within the context of focused games like the original Pac-Man, it merely serves to undermine the philosophy of Jet Set Radio. Without the tone set by the upbeat music and cell-shading for its virtual rendition of Tokyo, the game would be decidedly soulless.
That’s not to say JSR has lacklustre gameplay, though. Its troubles lie within smaller elements that the developers must have skimmed over back in the day, leaving a lasting effect 10+ years later. What makes it a compelling experience today, then, is how the game’s visuals and audio combine with the aged mechanics to form a time-transcending experience.
As a member of the unruly Graffiti Gangsters, it’s your task to spread the clan’s presence all across the city of Tokyo-to. This is done through spray painting over the existing images on the turf of rival gangs and making some spots of your own. Eventually, you’ll square off against rival groups for dominance of their section of the city. Sounds easy enough, right? 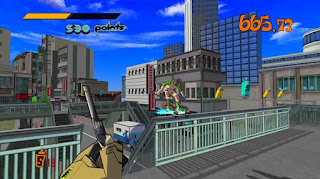 Of course, not everyone is peachy about the state of Tokyo-to. Police officers will show up during each mission in an attempt to take down your lawbreaking, vandal self. They’re not holding back either. Expect to navigate through tear gas, get shot, have officers cling to you, attack dogs chase you, and even evade the homing missiles of helicopters. There’s a certain puzzle element involved in figuring out what will distract the cops so that you can get back to your oh-so-important art wars.
In addition, you’ll have to master the art of rollerblading, grinding rails, scaling walls, and pulling off tricks on the ol’ half pipe. Doing so rewards you with a higher score (not to mention the simple satisfaction of pulling off a neat trick). You’ll even get opportunities to recruit more members to your clan, who can subsequently become playable characters.
All of this occurs while the underground tracks of pirate radio station, Jet Set Radio, hum through your earphones. Given that the songs reflect the game’s core foundation, they haven’t become irrelevant in the slightest. Some gamers were paranoid about the track selection prior to the game’s digital release due to licensing issues, but you can rest assured that this HD version actually surpasses the original. This time, you get the North American, Japanese, and European soundtracks rolled into a 28 song mega package. 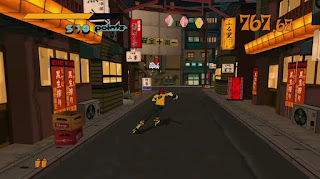 That rebellious mindset associated with the popularity of rollerblading and skateboarding comes through in every aspect. You’ll feel genuinely engrossed in spraying down the neighbourhood despite this concept being present from start to finish. Even if some will decry the lack of variety in gameplay, there are enough subtle hooks and tweaks thrown into the formula that it never quite feels tedious.
When the problems alluded to earlier kick in, though, you might be less entertained. The chief among them is the dastardly duo of wonky controls and a questionable camera. At certain points throughout the game, you will encounter spots where jumping is imprecise and the camera latches onto irrelevant objects. While not a broken game by any means, these spots can be rather frustrating if you are starved for patience. Conversely, if you’ve endured dreadful cameras in the past, you can take solace in the fact that Jet Set Radio is less obnoxious than most.
Other flaws are minor, but still unsettling. When you’re competing against rival groups, you have to spray each member a certain amount of times whilst they run from you. Unfortunately, the numbers are jacked up to the point where it feels redundant. The time limit is also unnecessary since it will only ever expire when you’re confused about the layout of a level…which is precisely when it would be handy to have the chance to explore. 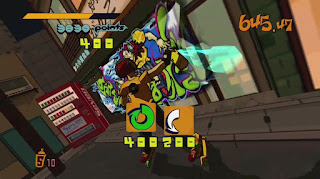 If you can get past those gripes, you’ll find a thoroughly rewarding game with plenty to do. A personal favourite of mine is the ability to draw your own graffiti, which can then be plastered all over the streets. I’ll just let you consider the “potential” yourself.
The game’s artwork itself isn’t too shabby either. Thanks to the wonders of cell shading, Jet Set Radio looks as good as ever – no, better. The HD coat of paint thrown on makes the classic game look positively legendary.
It’s thanks to the flavourful visuals and audio that Jet Set Radio remains relevant in 2012. When you’re racing through the streets with the music pumping and gazing at fluid animation, it’s easy to forgive the occasional struggle. Best of all, it will appeal to more than those wanting a nostalgia fix (provided you enjoy the game’s rebellious attitude, of course).
If nothing else, hope for a digital release of the game’s sequel. Jet Set Radio is something you simply need to experience.

PlayStation is still #1 in Australia