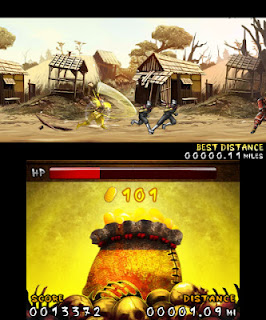 You’ve got to admire the logic and historical accuracy of video games. According to Samurai G, Tengu (the famed “Harbinger of War”) sealed his devastating power inside thousands of gold coins. These coins are conveniently scattered throughout a linear path whilst suspended in mid-air. Despite the presence of an enemy force large enough to collect all the gold in a timely manner, our hero Tetsuo presses onward.
As an endless runner, Samurai G is relatively simplistic. Your goal is to run (you guessed it) endlessly in the same direction whilst the screen automatically scrolls at a frantic pace. Obstacles to your progress include ninjas, hidden bamboo, mounted samurais, and shuriken.
The game is divided into “levels”, but these are less traditional in the sense that you’ll be starting from scratch each time you boot up the game. Unlike Teyon’s Bird Mania 3D, you’ll revisit the exact same environments in the exact same order until you surpass your old runs. If you don’t mind the monotony, this certainly gives you an opportunity to better your reflexes and adapt to the game’s patterns.
Things do get more interesting, though. Tapping the L button transforms your samurai into a super saiyan-esque speedster. In addition, you’re granted temporary invincibility and powerful slashes. Unfortunately, the power of gold is so immense that it seems to break the game. Not in the overpowered sense, but the controls seems to genuinely break down. Jumping is delayed, slashes take much longer to execute, and animation frames occur at a leisurely pace. 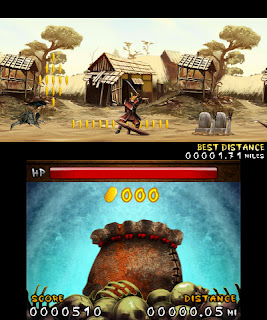 I once had to wait about 20 seconds for the game to start moving again. I (falsely) concluded that the game was loading an elaborate action scene, but all I saw whilst in limbo was sluggish animation and moments that had me convinced the 3DS was frozen. The icing on the cake was stumbling into an instant death trap right after the game decided to function again.
It may not look like it, but Samurai G is a very challenging title. In the average level, you’ll have to put up with an onslaught of projectiles and a myriad of other factors. In spite of the game having a samurai theme, you’ll need to develop the skills of a ninja if you want to succeed. Enemies frequently throw projectiles that are hard to discern without expecting them. It’s not bad design so much as baffling to the uninitiated.
Do you pay attention to the ninjas gaining ground on you or wait for a bamboo to show up so you can hop over it? Do you jump over shuriken or slash them with your sword? When you go gold, do you run to the edge of the screen to defeat the most enemies and risk running into an instant-death trap? These are the questions that you have a split second to answer. And yet, the game is thoroughly satisfying despite its unyielding intensity. 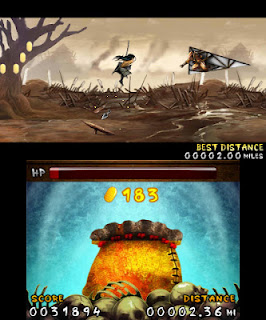 Still, your will to put up with that difficulty ultimately dictates the amount of enjoyment you can derive from Samurai G. If you’re incompetent, you’ll likely rip your hair out dying in the same areas ad nauseum. On the bright side, this isan endless runner. If you’re not interested in playing a game over and over, I question why you’re still reading this review after the words “endless” and “runner”. Does this justify the harsh, borderline archaic design? Probably not, but it would be equally unjust to dismiss the game based on its learning curve.
Beyond the simple joy of going Super Sonic (seriously, this guy may actually outpace our hedgehog friend), there are several achievements to unlock. They are further divided into two categories: single run and long-term. In case that’s not self-explanatory, the former ones include tasks like “Run 10 miles in one run” whilst the latter uses “Activate Golden Mode 200 times across all runs”. Beyond one legendarily challenging achievement, they should all be relatively easy to unlock, but they at least provide some incentive to press onward in what is a budget-oriented diversion.
While not the most ambitious endless runner we’ve come across on the eShop, Samurai G has moments that are truly golden. If you’re willing to skirmish with the occasional slowdown, the paltry entrance fee of $1.99 USD may well be worth it. Just beware of the brutality if you’re seeking a more casual experience.
-Clark A

The upcoming games to look forward to (EB World Expo)