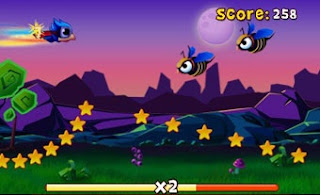 Bird Mania 3D is significant in a few ways. Firstly, it’s the first Nintendo eShop game to be retailed at $2 USD. The game also signifies developer Teyon’s entrance into the eShop marketplace. However, the more interesting event that the game signifies is that it’s the 3DS’s first game that anyone could pick-up-and-play without any previous knowledge and still enjoy.

The very thin story of Bird Mania 3D is what it sounds like; very thin. Winter (in the game) is just around the bend, so all of the bluebirds start flying south to Africa. Fun fact; bluebirds don’t migrate overseas. Anyway, one bluebird named Mojo oversleeps and finds himself in a mad dash to catch up with the other birds, some of which are already in Africa. And so the player starts the game as Mojo, trying to catch up with the flock or end up arriving in Africa, whichever comes first.
Now, I would be completely fine with this set-up if it weren’t for one thing: the game is impossible to beat. Not only is the player’s main objective to collect stars rather than survive, but the only game mode available is an infinite, randomly-generated gauntlet of enemies and obstacles. Even if it’s just a game, you are literally throwing away a confused and scared bird’s life just for your entertainment! Even in Angry Birds the scenario made more sense; the birds were furious that the pigs stole their eggs (basically their children) and wanted to rescue the eggs at any cost, even if it meant being flung from a slingshot to be used as a kamikaze projectile. WHAT HAS THE WORLD COME TO?!?! (Note: this comes from the man who attached another man’s face to a motorbike in Just Cause 2 and rode it for several minutes) 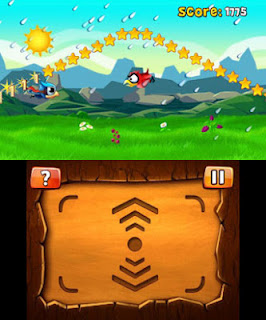 Anyway, onto the main meat of the game; the actual game part. The controls are extremely simple; move Mojo up and down with the stylus and use any of the shoulder buttons for dashing. The player can also use the circle pad and X + B buttons to control Mojo, but stylus control is highly recommended as it provides the necessary precise movement that the game demands at high speeds. The player is thrown into a randomly-generated assortment of auto-scrolling trees, bushes and enemies that Mojo must avoid and use to the player’s advantage. If Mojo hits an enemy bird while flying at normal speeds, he will instantly die and be forced to start a new run. However, if Mojo dashes into an enemy bird, the player receives a multiplier that will increase the amount of points collecting stars and popping balloons will give the player according to the current multiplication modifier.

Using dashing effectively, the player can get some truly stunning multipliers if they play it right and have fast enough reflexes. However, dashing through a bee will set the multiplication modifier to zero, so bees are best avoided entirely. If Mojo hits any of the green, branchy parts of the tree he also instantly dies (Maybe the tree trunks in this universe are made of paper-mache?). If viewers couldn’t tell, this game very much wants Mojo dead, but the cruelty is used effectively as it makes the oncoming obstacles almost suspenseful, which creates an ever-present tension.

The music and visuals in this game are more of a mixed bag. The sound effects will either be entirely forgotten after playing or will get on your nerves for the rest of the day after longer play sessions. There are only two tracks of music in the entire game, with one of them being entirely forgettable. However, the second track is a marching theme that is extremely well done; not only is it encouraging, but it ranges from orchestral string instruments to drums to electric guitar. Considering that the marching theme is what’s heard throughout the entire time when Mojo is flying, the other sounds become bearable and overall the sound package comes out on the good side. The graphics are all good from a technical level; while there is little animation, all of it is drawn well and the sprites never look stretched or out-of-focus. However, the graphic’s downfall appears when the 3D is turned on. While the parallaxed mountains in the background of the main game looks absolutely stunning, everything else looks horrendous; the clouds look jerky and the other sprites pop-out too much to maintain their original fresh look they have in 2D. It also becomes hard to focus the sprites, as they do have a slight jerking when moving, but it’s not as noticeably as the clouds. 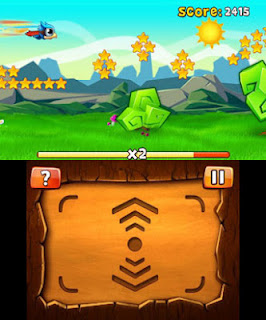 While it all fits together well, there’s a small problem that anyone will notice if they play for more than 20 minutes; the random generation really just chooses from a list of pre-made level segments. This especially becomes a problem when you realize that there are only about a dozen segments and very few types of enemies and obstacles, leading to seeing a lot of the same content (barring enemy locations and balloon positioning, which are still extremely fixed in the segments) over and over within the same run. If you’re not bothered by this technique in games like Cannabalt and its clones, then this won’t bother you, but to me this feels a bit cheap and I just can’t get over it. Even while the experience is solid, it feels like there should be just a few more of everything in the game, and that feeling isn’t easily avoidable when noticed. Whether you want to call this cheap or not using the game’s full potential is up to you, but to me it feels slightly cheap.
In the end, Bird Mania 3D might be worth the $2 USD for a few rounds of star-collecting and dashing action if you’re into these types of games, but if you are expecting to have your mind changed about the sub-sub-genre of auto-scrolling games, then this isn’t the game that will convert you from a non-participant into an addict.
-The V8 Ninja