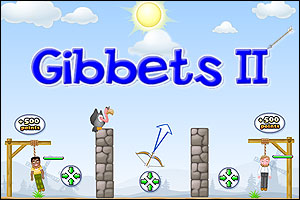 Casual developers have greatly benefitted from the iOS platform – invent a simplistic concept, add easy controls, mix in the ‘x factor’ of fun and combine to provide hours of entertainment and reach even the most inexperienced of gamers. A perfect example of one of these addictive, fun games is Gibbets. The company behind it has attempted to cash in on the success of the original with a sequel, the shockingly different title of Gibbets 2. So how does it compare to the original? With a touch of puzzle gaming to a skill based challenge it does very well, if the truth is told.

Slightly morbidly, Gibbets is a game where you attempt to save hanging men whilst vultures monitor your progress. So with this audience, Robin Hood like, you save your compatriots by snapping their noose in twine using your extraordinary gift with a bow. That is it. Fire the arrows, hit the rope and save the companions. Sounds easy? Initially it is. Fear not, it does get more challenging. Complexity is added by the amount of arrows allocated to the player as well as the length of time your men could survive whilst being hanged (some really don’t have much breath left). Additional challenge is reached through obstacles, trick shots, additional ‘bonus’ points and multiple arrow release mechanisms. Further, clearing levels does give access to bonus stages where one can take down the circling vultures, a particularly gleeful proposition. 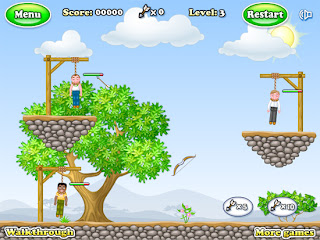 Difficulty levels greatly benefit by a graded system. The player can choose between three modes: Easy, Moderate and Hard. The easy should be achievable by just about anyone, the medium is for most enthusiasts whilst the hard mode will challenge the hardcore gamers. It is appropriately titled. Each level is short, but completion is required so as to open the next. With such a design, it may be tempting for the developers to repeat challenges. This temptation, happily, has been resisted as level design fun and varied, each individual stage marked by its own feel and individual challenge.

One complaint could be the manual controls system. It is not intuitive as the drawing of the bow simply takes a point and drag mechanism, one that is completely independent of the actual position of the bow. This point is minor, but is ill explained in the tutorial and can provide the gamer with some initial frustration. Indeed, even through trial and error, the control is so counter-intuitive (and emphasised with the design of just the second level), it may turn off some.

The artwork of the game is cartoony and cute, probably for the best considering the morbid nature of its design. As a result, its potential audience is wide. Music is appropriate for a casual game, if a little of arcade game fare, and does trend towards repetitive. One feels the theme of the game could have benefited from a Monty Python-like vulture booming “food glorious food”, though. Massive missed opportunity there.

Overall, Gibbets 2 is fun in the casual, addictive sense of gameplay that does justice to the original. It is a very enjoyable way of spending a few hours and will appeal to a large/broad audience. Its simplistic gameplay works in its favour, as a number of different challenges make this both a skill and at times a puzzle game.