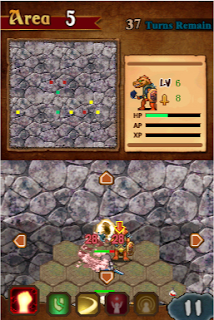 Circle Entertainment is not even trying now. It’s a development team that has never really minded ripping off other original ideas and throwing a cheap copy onto DSiWare, but it’s taken things to a whole other level this time around.

As a business strategy it makes sense. There’s not a great deal of support left for DSiWare, so there’s money to be made by releasing something – anything – on the platform. And Circle has a unique ability to make its games promise the world. Now previously these games never exactly set the bar high for quality, but were at least playable. Recently, though, Circle has been dropping even from that low base. The knockoff of Plants Vs Zombies, Devil Band, was especially embarrassing.

I’ve played all these games (the dubious joys of being a game critic) and despite going in with ready expectations, I can honestly say that nothing could have prepared me for this latest ‘effort’ – 18th Gate is such a horrible game that these guys should never be given an opportunity to develop a game again. In fact I’ll go as far as to say this is the worst game I’ve ever played. And yes, I have played Superman 64 and Big Rigs – those games at least made me laugh at how bad they were.

In concept 18th gate is meant to me a turn-based dungeon crawler. Across each map (divided up into hexagons) players take turns moving their characters around and combating the various monsters that are placed around each map. As I said before, Circle makes their games sound interesting, and this kind of strategy game is appealing on paper. 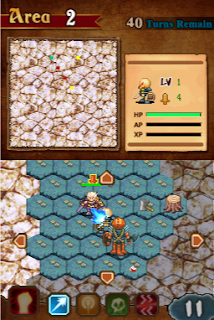 But let’s just jump to how this game gets things wrong, because the concept is probably the best bit about it. In execution it’s less fun than having your teeth pulled. Usually that’s said as a joke, but I’m not joking here. At least when I had my wisdom teeth pulled I got some awesome painkillers, and the dentist had some rocking music going on in the background.

There’s nothing rocking about the music of 18th Gate – quite the opposite. The midi-quality tunes that are looped painfully often would, I hope, have been made in five minutes on some free music composer tool. If there was any more time spent on it than that then I worry that the music team (or lonely person) at Circle needs a dramatic rethink of career.

I’d suggest some soul searching by the graphics team too. Here they’ve failed to even get the lines on the hexagons right. Everything from those tiles to the character sprites, the text, and the art work, is a blurry, jagged mess. On top of that, the art designs of character profiles have no personality and so even if there wasn’t some spectacularly poor choices with the colour palette, this game would still be a visual nightmare.

People often say to me that graphics don’t matter, but what these people don’t understand is there is a difference between a game that is simply functional in terms of its graphics, and a game that is aesthetically broken. Fortunately there are very few games that are actually broken in terms of aesthetics. This is one of them. Even if you can forgive how generic everything is here, the game is actually uncomfortable on the eyes to look at. 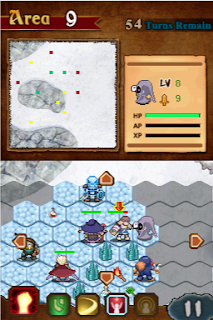 The presentation is nothing compared to how badly the game plays though. This is an “RPG” that has no plot whatsoever. You’re told with a text box at the start that monsters had invaded a castle or something and you need to escape. And… that’s basically it then. Characters pop up in your team without any real explanation. They’re just there, and now they’re your ally. The monsters are also just there on the map, and spectacularly Circle has figured out how to make RPG games without bothering with such silly things as AI – just have the monsters standing there until the players attack them, and then “attack back.” Let me restate this for emphasis – with very few exceptions the game is filled with creatures that just stand on the spot waiting to be attacked.

“So it’s more like a puzzle game?” I hear you ask. There’s some evidence to suggest that perhaps that’s what Circle was originally aiming for. The tiny range of special abilities at player’s disposal tend to be more in line with the special abilities of a puzzle RPG like Puzzle Quest, and each level has a strict time limit – find the exit within a certain number of turns or its game over.

So there’s some puzzling in order to figure out how to kill the most monsters possible and still reach the exit. It’s important to keep the experience coming in so you’re not overwhelmed in later levels because as with other Circle games the difficulty spikes are all over the place and it’s unlikely that you’ll bother getting to the end. It’s surefire proof that a game hasn’t been adequately play tested if it’s possible to be overwhelmed by the third stage for being merely adequate at the previous two stages. If you do happen to find yourself overwhelmed the only solution is to start the game again as there is no way to replay old levels to grind up some experience levels.

18th Gate wasn’t an attempt at making an interesting, engaging or even entertaining game. It’s nothing more than cynical exploitation – exploiting the last of DSiWare support and exploiting the people that still check in with DSiWare releases. As such it’s an utterly offensive piece of trash.