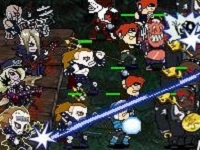 Oh look. Another Circle DSiWare game. And you know what? I owe Gameloft an apology. I thought Gameloft was the most offensively cynical developer/ publisher in the games industry, getting away with plagiarism on mere technicalities. But I was wrong. Gameloft’s got nothing on the depth these guys will sink.

See, while Gameloft is hopelessly derivative, it at least masks that in high fidelity visuals and good quality music. The rip-off of Call of Duty (Modern Combat), or Starcraft (Starfront), might generic and bland, but at least it’s pretty. Circle’s latest “effort,” Devil Band – Rock the Underworld on the other hand, is neither. It’s horrific, but only because it’s ugly and it sounds like hell. Perhaps it was a deliberate artistic decision, given that horror and hell is precisely the theme of the game, but it doesn’t make for a game that’s fun to play. And given Circle’s previous efforts, I doubt they’re talented enough game artists to make something self-referentially bad.

But anyway, the game. Devil Band – Rock the Underworld is a cheap and nasty clone of Plants Vs Zombies. Props to Circle for picking the good ones to steal from. Plants Vs Zombies is, after all, the greatest example of the tower defence genre ever. Instead of needing to protect the house from the waves of zombies here, though, you’re taking control of an EVIL (caps because they’re so EVIL) rock band. Instead of placing plants down in the way of the zombies to kill them, you’re placing groupies. 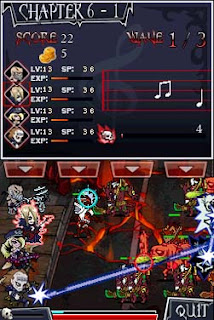 But despite being a carbon-copy of the gameplay, Devil Band forgot one little thing – balance. Zombies come on so thick and fast that even the very first level is impossible if you rely on the groupies to defend you. Apparently Circle realised that, so they threw in overpowered super powers that the band members can activate by taping on an enemy zombie. And instantly, the game goes from “impossible” to “impossibly easy.” Perhaps Circle thought that put together it would make for a medium-difficulty game?

The game is, of course, worthless in terms of replay value. Even if you manage to stay awake through the entirety of the blessedly-short campaign, there’s no reason to return for more. Especially when the visuals of the game are right up there with Circle’s worst efforts (and that’s saying a lot), and the sound is a cocophony that just might make your ears bleed.

Devil Band is an utterly unforgivable game, and anyone who does buy it should be punished for fooling Circle into thinking they have fans. In fact, that could be another unintentional, self-reflective joke – the only people who could enjoy this are brain-dead zombies, and Circle’s come up with a game that is all about killing them.